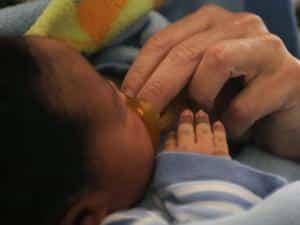 Desmond Mutengo, 24, has rescued a three to five day old baby boy after finding the child in a 1.5m-deep manhole, almost completely submerged in dirty water.

Mutengo, a truck driver from Milnerton was working near Killarney Gardens on Friday when he noticed a women sitting with a baby in her arms and her legs dangling in an open manhole. Desmond found it odd and also feared for the safety of the mother and the child. The mother’s face was hidden and he saw her wrap the baby in a white blanket.

“I drove past and thought the woman was acting very strangely … I just thought it suspicious she was sitting with a baby near a manhole. That’s dangerous,” he said.

Desmond had a delivery to make therefore he drove past, but when he returned, he found that the woman and the child were no longer there.

“Something said to me I must go back and check the manhole. ‘Just check, just check,’ I thought to myself.”

He then went near the manhole and was shocked to hear the faint cries of the infant. The baby was inside the manhole submerged only his head above the muddy water. Desmond called two other men for help and together they were able to fish out the baby.

Desmond wrapped the baby in a jacket and handed him to the police as soon as they arrived. As he had to go for another job, the Good Samaritan could not see the baby after the incident, but he does plan to meet him soon.  He does not think that he is a hero but is shaken by the incident as he too is father to a four year old son.

“I fell in love with him. That baby broke my heart. He was left there for dead, in dirty water and would’ve died. I hope that I get to know him over the years and one day I can tell him what happened,” says Desmond.

The police are meanwhile looking for the mother of the infant who faces charges against abandoning her child.