Police officer James Hurst has been widely praised for comforting a toddler who was found alone and wandering a Georgia street. The 16-month-old boy was scared, sobbing and screaming while doctors tried to examine him in a hospital emergency room…until Hurst, himself the father of two sons, scooped the child into his arms and held him. The boy fell asleep against the policeman’s chest and a photo of those sweet moments has gone viral. 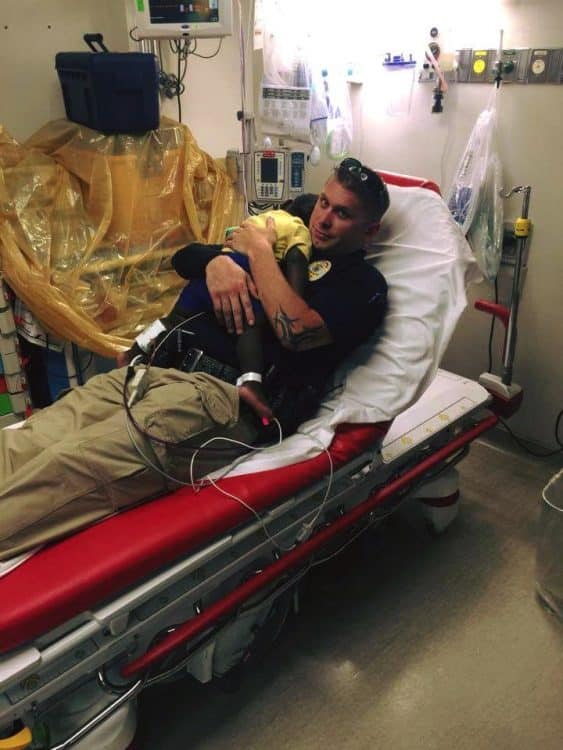 “I’m no hero,” says Hurst, who has been on the police force for less than a year. “It has nothing to do with a badge, and everything to do with being a compassionate human being.” Hurst says that it simply felt natural to be there for a frightened child who had nobody else to turn to.

The officer had responded to a report of an unsupervised toddler wandering on a high traffic residential street in Savannah, Georgia. Hurst provided the police escort when the child was taken by ambulance to Memorial University Medical Center, and he remained with the toddler in the emergency room.

Hurst rubbed the child’s back and rocked him, soothing like he often does with his own two children. But the sleeping child began to feel heavy to this policeman who was weighed down with 25 pounds of body armor and other equipment. So Hurst laid down on the bed while continuing to let the child sleep against his chest, relieved – as was the hospital staff -that the little boy was feeling safe and comfortable. Hurst spent two hours with the boy who slept cradled in his arms for 45 minutes.

The child is in good condition and police have closed the case without filing any charges.

Officer Hurst became a policeman after serving in the US Army as a Black Hawk crew chief. He says that there are 650 other officers on the force who would have done the same thing. In fact, he says “this is the type of stuff we do every day.” Hurst also praised his police chief for creating a culture of community-oriented policing.