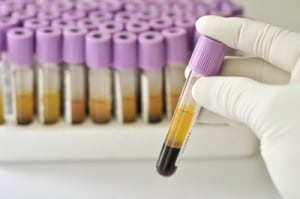 Few words can evoke as much fear in the hearts of parents as “your child has cancer.” But parents all over the world hear it every day. Most often, the cancer is acute lymphoblastic leukemia (ALL), a B-cell cancer that affects 1 to 2 children out of 1,000 each year. For 85% of those children, chemotherapy works. But that still leaves another 15% of ALL children with cancer who are resistant to treatment. It is that 15% that the research team from the University of Pennsylvania is focused on helping.

B-cell cancers like acute lymphoblastic leukemia, B-cell non-Hodgkin lymphoma (NHL) and the adult disease chronic lymphocytic leukemia (CLL) are resistant to the body’s natural line of defense. While most cellular diseases in the body are recognized and destroyed by T-cells, B-cell cancers are able to go unnoticed by the T-cells. This allows the cancerous cells to multiply and take over the body. When chemotherapy fails, bone marrow transplants serve as the last and only hope of survival.

“I’ve been meeting with families to discuss bone marrow transplant for 20 years,” pediatric oncologist Stephan A. Grupp of the Children’s Hospital of Philadelphia and lead author on the study told Medical News Today. “In almost every meeting, I say that bone marrow transplant is very hard and that if we had an alternative for children at that point in treatment, I would be delighted to put myself out of business. And for the first time, we’re seeing how that might actually happen.”

Grupp’s optimism is fueled by the research he and his team from the Children’s Hospital of Philadelphia have been working on. They have taken T-cells from the bodies of 12 non-responsive B-cell cancer patients, genetically modified them so that they can recognize the cancerous B-cells and put the reengineered T-cells (called chimeric antigen receptor T-cells) back in.

While results from the study are still in the early phases, Grupp’s team is excited about the potential. So far, 9 out of 12 of the B-cell cancer patients involved in the first study have promising results. The modified T-cells have survived several months in these patients, and the fighter cells have managed to multiply and kill off large quantities of cancerous cells.

One of the patients in their study, Emily Whitehead, fell into the 15% of children in which intensive chemotherapy had failed. While chemo had managed to cure her of her cancer initially, the disease returned, not once, but twice. It was then that Emily was enrolled in the CTL019 study.

Unfortunately, she became extremely ill after receiving her modified T-cells. She had developed a condition known as cytokine release syndrome, a condition in which the rapidly growing T-cells produce a protein involved with rheumatoid arthritis. This left researchers concerned on whether or not the therapy was working. But after administering a drug to counteract the protein that was making her sick, Emily’s condition improved dramatically; almost overnight, her breathing improved, her blood pressure returned to normal and her fever went away. But even better than that, Emily’s modified T-cells were hard at work.

“Three weeks after receiving the treatment, she was in remission. Emily completely responded to her T-cell therapy,” Grupp said. “We checked her bone marrow for the possibility of disease again at three months and six months out, and she still has no disease whatsoever. The cancer-fighting T-cells are still there in her body.”

The team is excited at what results like Emily’s might mean for children and teenagers with advanced B-cell cancers in which standard chemotherapy has failed. They hope to enroll more patients in their study so that they can see if the results remain the same in a larger group of people.