JJ is loyal, obedient, and friendly. She could be anyone’s dog, but it just so happens that she’s Kaelyn Krawczyk’s dog. Otherwise known as KK, Kaelyn has a rare condition that causes sometimes life-threatening reactions. JJ has been specially trained to detect KK’s episodes, and it was because of her amazing abilities that JJ became the first dog ever allowed to sit inside an operating room during surgery. 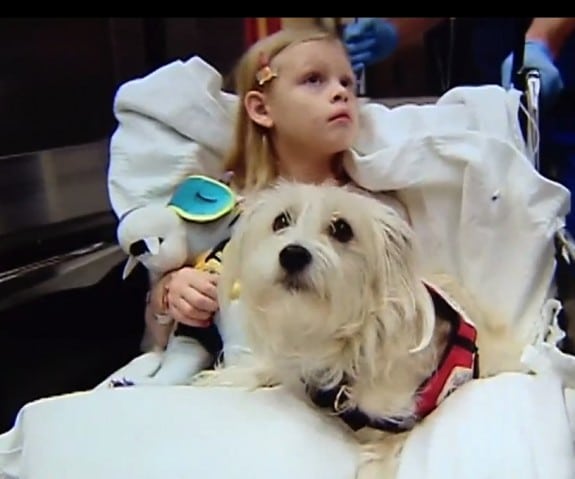 KK was born with mast cell activation disorder, a condition that causes reactions when she gets too hot, too cold, or becomes stress. One of her biggest triggers is fatigue.

“Everyday things that every 7-year-old wants to do, like run around and play or go to the park or anything like that, I mean, any of those things can be a potential trigger,” Michelle Krawczyk, KK’s mother, told NBC affiliate, WNCN in Raleigh, N.C.

Reactions can range from simply feeling a little uncomfortable to life-threatening reactions that cause stomach cramps, vomiting, difficulty breathing and drops in her blood pressure. Those reactions meant that KK needed to be monitored constantly. Even in sleep, KKs parents worried.

Deb is the program director of Eyes, Ears, Nose and Paws, a nonprofit in Chapel Hill, N.C. Her center trained JJ, a now 2-year-old rescue dog, with the same method used to train diabetic-alert dogs. Apparently the method worked because, according to Michelle, the 2-year-old dog detects KK’s episodes sometimes minutes in advance, giving her family precious advance notice.

“She is the reason why we can sleep at night, she is the reason why KK can have a more normal life, and that might not seem like a lot, but when you have to restrict your child from normal every day activities, the ability to do anything more is just phenomenal,” Michelle said.

JJ does her job so well that she accompanies KK everywhere – home, school, and now in the surgical room, the pair are completely inseparable. 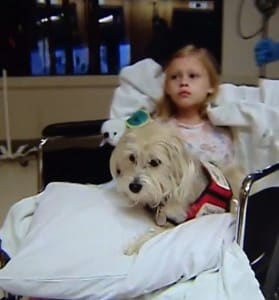 KK needed surgery because she’d been suffering from recurrent kidney infections. Doctors at Duke University wanted to treat the problem through surgery – a 45 minute procedure that would hopefully help stop the infections. Knowing what they knew about JJ, and how coming in or out of anesthesia could cause extra stress for KK, it only made sense to have JJ in the operating room to help monitor her owner and friend during surgery.

“It struck us that JJ is really just an additional monitor that provides information about what’s going on with KK,” Dr. Brad Taicher, assistant professor of pediatric anesthesia at Duke University Medical Center, told WNCN. “We’re very excited for the fact that JJ can join us for this. We’re excited to see what she can do and what information she can provide us.”

Dr. Taicher said that there were some who thought he was a bit crazy for recommending that a dog accompany them in the surgical room, especially since surgical rooms are considered a sterile field. But according to Dr. Taicher, the biggest concern wasn’t over infection.

“Our concerns for infections were pretty low and we thought that the benefits of having JJ as an extra anesthesia monitor would be of greater benefit than the risk of infection,” Taicher said.

As you may have guessed, JJ did her job very well. She sat calmly underneath her trainer’s chair throughout the procedure giving only a mild, controlled reaction a couple of times. However, the procedure ‘went perfectly’ and there weren’t any major reactions from JJ, Dr. Taicher said.

And Michelle couldn’t be happier – not just for JJ being there for the surgery, but for her being there each and every day.