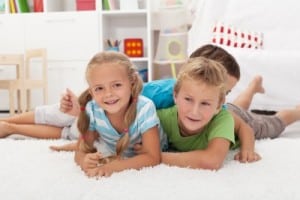 According to the most recent statistics from the Centers for Disease Control and Prevention (CDC), about one in every 88 children are diagnosed with autism. This is an increase from one in 110 back in 2009; in fact, autism rates have been increasing rapidly over the last decade. Why?

Well, there are a lot of possible answers to that questions – everything from better testing and awareness to chemicals in the environment are suspected. Previous studies have also indicated that children with a sibling on the autism spectrum are at higher risk for being diagnosed than those that do not have siblings with autism. But according to a new study from Aarhus University, that risk isn’t as high as previously thought.

For their study, Therese Gronborg and colleagues examined birth, civil and psychiatric registries to track 1.5 million children born in Denmark between 1980 and 2004. Through 2010, a little over 13,000 of those children were diagnosed with autism; 276 of those children had an older sibling also diagnosed with the condition. On average, this equated an elevated risk of autism of about 7% for children who had a sibling with autism. However, the percentage did vary somewhat, falling between 4.5% and 10.5%.

Children who had an older half-sibling with autism were also found to have an elevated risk of being diagnosed – the highest risk being for those that shared the same mother (2.4 times greater than those without a sibling on the spectrum). Half-siblings who shared the same father had a 1.5 times greater risk of ASD if their older sibling also had the condition, but researchers said that this finding could have simply been chance.

The increased risk is a bit concerning, especially for parents that already have a child on the spectrum. It may sway their decision on whether or not to have another child. However, there may be more at play here than just genetics, Gronborg says, because if genetics were the only factor, then the prevalence would be higher.

“I think a lot of autism researchers agree that the causes of autism are many and it’s very complex,” Gronborg, who was the leader on the study told Reuters Health. “If it was only genetics, we would see a much higher recurrence rate [among siblings].”

So what could be responsible for the increase? It’s likely that, just like autism itself, there are many different factors. It may be possible that parents of autistic children are already aware of the condition and its symptoms, or “it could be something in the upbringing,” Gronborg said.

Zachary Warren, from the Treatment and Research Institute for Autism Spectrum Disorders at the Vanderbilt Kennedy Center in Nashville, Tennessee says that the study definitely indicates a much smaller risk for children who have a sibling already on the spectrum; some studies have indicated that the risk could be as high as 18%. He called the Aarhus study “slightly conservative” when speaking with Reuters Health. However, he also said that the study is “good information to have.”

“[Parents] really want to have more definitive information about recurrence risk. I would still be, at the end of the day, more comfortable talking to families about the range of known risks,” he said.

And Gronborg added that the information found in their study may not help parents pin down an exact risk factor for their family, so having a wide range of information could be a good thing.

“No doubt there is an elevated risk and whether it [seems like] a high or low risk for families, they have to decide,” Gronborg said. “It’s also an average based on many families, so for some families the risk will be higher.”

I think what intrigued me most about this study is that we have five children. Our second oldest was diagnosed with autism. Our youngest son seems to have the closest bond with my son on the spectrum, and interestingly enough, my youngest mimics many of the behaviors and mannerisms. How do I know it’s mimicking? Well, we figured it out when, one day, there was a really annoying, loud-pitched noise (the smoke alarm, I think). My youngest child was sitting on the couch. My son with autism was standing in the dining room. As soon as he heard the sound, my youngest son’s eyes flew to his older brother. Only after my son with autism placed his hands over his ears to try and drown out the sound did my youngest do it. It happened in a split second, but I saw it.

Is it possible that my youngest is also on the spectrum? Maybe. But honestly, I don’t believe that is the case; in most things, he is right on target – potty trained, speaking well, he’s much more affectionate than his older brother ever was at that age, more aware of the world around him. Yet up until that day, the day I actually saw him mimic, I worried. And I have to wonder, is it at all possible that maybe a sibling here and a sibling there were mimicking autism symptoms? I don’t know. I’m not a doctor or a scientist. But it’s certainly something to think about.

What do you think? We’d love to hear your thoughts!