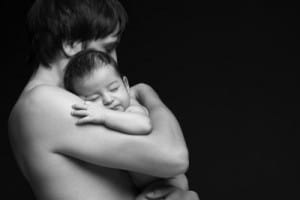 While many fathers know that their support is important for successful breastfeeding, some of them feel as if it makes them feel inadequate, so much so that many of them feel like breastfeeding is standing in the way of their involvement with baby. But is this really true, or are we forgetting to address fathers when dealing with breastfeeding issues, failing to send the message of just how important they really are?

“In our research, fathers of breastfed babies scored just as high as fathers of bottle-fed babies on scales of father involvement, and in fact, the dads of breastfed babies were involved in a greater variety of activities than dads of formula-fed babies,” Francine de Montigny, professor of nursing at the Uiversite du Quebec en Outaouais, and Canadian Research Chair in psychosocial family health, told Father Involvement Research Alliance (FIRA). “The men with breastfed infants were holding and comforting their babies, giving baths and baby massages, while the involvement of the fathers of bottle-fed children tended to be more centered around giving the baby a bottle. I think fathers imagine that being able to give a baby a bottle will help them become more involved in lots of other activities, but in our study, this was not the case.”

Even fathers who seemed to be the most invested in breastfeeding reported to be conflicted – on one hand, they felt that breastfeeding had created a feeling of closeness in their family and it didn’t interfere with their parenting, but at the same time, these fathers still felt inadequate on a certain level, despite their strong involvement in their child’s life.

“These fathers felt that their babies had this one crucially important need that they were unable to meet, because it could only be met through breastfeeding,” Montigny said. “It was sad to hear some fathers say, ‘I can’t do the most important thing.’”

But that’s not true, Montigny (and experts) say. And the fact that fathers believe this means that we’re seriously failing when it comes to helping dads understand just how important their involvement is.

“It seems that when it comes to meeting the needs of an infant, for some parents the whole focus is on breastfeeding,” Montigny said. “These fathers did not seem to be aware that all the things they were doing – the skin to skin contact and other physical contact that occurs during comforting, bathing, infant massage and other kinds of routine baby care – are also very, very important for their baby’s well-being and brain development. We need to do a better job of communicating this to parents in general, but fathers in particular.”

After doing a quick review of the online advice for fathers of breastfed babies, Montigny found her suspicions were true. While many of the information shed light on the many things fathers could do to bond with their babies, none of them really discussed WHY those things were so important. Science has proven that those moments of physical contact help contribute to healthy neurological, social and emotional development.

Dads also shared that they are experiencing stress, right along with mom, when breastfeeding issues ensue. In fact, some fathers even felt devastated when their partner stopped nursing because of common breastfeeding problems. And that stress, Montigny says, can end up affecting dad’s involvement.

Support systems can help reduce this stress by remembering that many fathers do want to be involved in making breastfeeding successful for their partners. They can do this by addressing fathers, as well as mothers – something that dads actually complained about in regards to breastfeeding support systems.

“We had fathers tell us that during home visits, nurses talked only to the mother, even though, in some cases, it was the father who had called asking for help,” Montigny said. “When the help you get with breastfeeding problems isn’t that helpful, that, in itself, is stressful.”

But moms can also offer their support, reminding dads of just how important they really are, and how their efforts are helping with healthy development for their baby. This seemed to be the most effective means of support, and it even seemed to help influence just how much fathers wanted to be involved.

Parents.com offers a few ways new dads can bond with their new baby: