Home » Should Toddlers Have Access to Smartphones and Tablets? 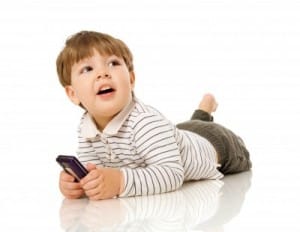 Technology is woven into every aspect of our lives.  So, it comes as no surprise that a survey of 5,000 women, conducted by babycenter.com, indicates a 64 percent increase in the use of smartphones, by mothers, in the last two years.  The survey also found that 75 percent of moms admit they regularly give their children access to their phone.

This has the app makers singing “cha ching” as they churn out apps, for tablets and smartphones, directed at parents of children as young as 4-months.  The hope is that children will get a leg up on their peers in areas of academics like reading and math.

But does it work?  The answer, at this point, is a firm unknown.

PBS has studied the use of educational apps by children aged three to seven and has found some benefits, but in these early days, there is no data on children younger than three.

The official stance of paediatricians is to equate tablets and smartphones with television.

Dr. Alanna Levine says, “(We) recommend that children under the age of two don’t have any screen time whatsoever.”

It is also recommended that beyond the age of two, children be limited to no more than 2 hours per day and only in 20 minute increments.

Levine feels that if toddlers are playing with these devices at all, it should be through interaction with a parent.

Many parents believe they have seen their toddlers learn new skills while using these devices, but experts caution that children are not likely learning as much as it appears.

Angela Booker, a professor and educational researcher at the University of California says, “A big part of learning is going from what we know and understand and making connections to the new things we’re taking in.  If you’re not there with them, interacting with them while they’re engaging in the iPad, you’re not going to be able to make those other kinds of connections.”

Levine concurs, “Just because you see a child apparently spelling by pushing a letter, that doesn’t necessarily mean that they actually know how to read and spell.”

So far, there is no proof that educational apps make children smarter, but there is also no proof that they cause any detriment, either.  It’s really an area that hasn’t seen a lot of data collection yet.  Many parents will continue to encourage their children to play with apps, in the hope that they will get a jump on their education.  Experts simply urge parents to use moderation in their attempts. – Jen R, Staff Writer