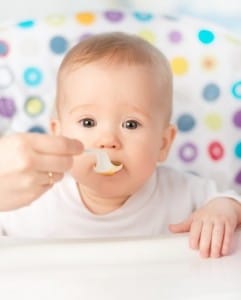 The importance of breast milk for babies is universally known. But now a new research by the University of Southampton also suggests that if solid food is introduced to the babies after 17 weeks along with breast milk, this may lead to reduced food allergies.

Dr Kate Grimshaw who led the research says that when babies are given solid food at 17 weeks with breast milk, it helps strengthen their immune system further and can lead to less food allergies.

She says that when there is a mix of these two food types, the infant’s immune system becomes educated as the milk promotes tolerogenic mechanisms against the solids.

She also stresses the importance of this food introduction at 17 weeks.

In general infants are intolerant to solid food before 4 to 6 months as their digestive system including the gut is immature and may produce symptoms like food allergies.

For the study funded by UK Food Standards Agency and published in Pediatrics, 1140 infants from the Hampshire area were selected. 40 of these children went on to have food allergies by the age of two while 82 did not. The diets of both group of children was observed.

The team found that children who had developed allergies began eating solid food earlier than children with no allergies – roughly, at age 16 weeks or earlier. Also the children with allergies were also more likely to be those who had not been given breastmilk by their mothers and had been introduced to protein from cow’s milk at a very early age.

Dr. Grimshaw says that women who do not breast feed are encouraged to introduce solid food at 17 weeks.