Home » Some Asthma Medications may Stunt Growth in Children

While sometimes a necessity, medications can and often do have side effects. Asthma medications are no different. In fact, a recent study has revealed that certain types of asthma drugs can stunt growth in young children. However, when compared to the benefits, the effect is small. 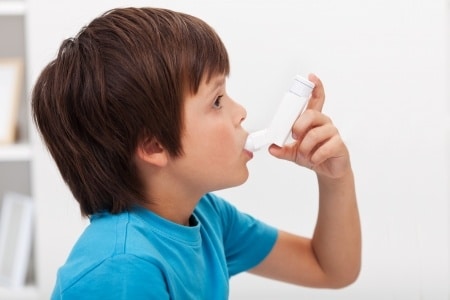 This new information comes from an analysis of 25 different case studies, which included more than 8,000 children with frequent asthma symptoms. All of the children took either daily doses of medications known as inhaled corticosteroids, or took nonsteroidal medications, or a placebo.

Published in the journal The Cochrane Library, the study found that, overall, children grew 2.4 to 3.5 inches over the course of one year. However, those that took inhaled corticosteroids grew about 0.2 inches less than those that took the placebo or nonsteroidal medications.

This effect was found to be strongest during the first year of treatment, but was less pronounced in subsequent years. In fact, one study followed children into adulthood and found that, even when the inhaled corticosteroids had been taken for four years, children only ended up being about 0.5 inches shorter, on average, than those that took the placebo.

While this may seem a little concerning to parents, researchers Linjie Zhang, of the Federal University of Rio Grande in Brazil, said the effect “seems minor compared to the known benefit of the drugs for controlling asthma and ensuring full lung growth.”

In fact, some studies have indicated that the drugs can help reduce the severity of asthma attacks, as well as the number of asthma-related hospital visits and asthma-related deaths, if taken as directed.

What’s more, the medication, if taken in smaller doses, doesn’t have as much effect on the growth hormone in children. It is for this reason that the authors on the recent study suggest that children take the lowest dose of inhaled corticosteroids as possible.

Still, the U.S. Food and Drug Administration said that inhaled corticosteroids should carry warning labels indicating their potential to slow growth back in 1998. As to which specific types of inhaled corticosteroids have the biggest effect is yet to be determined; there are currently seven different types, and the authors of this recent study suggested that each type should be examined to determine which ones have the most effect on growth.