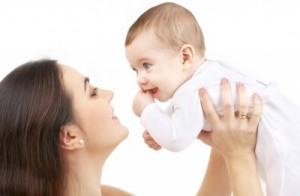 The act of “baby talk”, the cutesy high-pitched language aimed directly at infants, is something that appears in nearly all cultures and languages but not really understood. A new study, however, may show that this type of speech is wired into mothers’ brains for a good reason.

Reiko Mazuka, Yoshi-Taka Matsuda and colleagues at the Riken Brain Science Institute in Tokyo, compared the brain activity of 35 first-time parents with preverbal infants and 34 mothers with children who were already speaking. The mothers were monitored with functional MRIs while they listened to recordings of “baby talk,” or infant-directed speech (IDS), to see how the language affected their brains.

Mothers with pre-verbal infants had areas of their brains light up from the sound of the simpler IDS style of speech. The areas of the brain that govern language responded to the IDS, as well as the speech-related motor areas of the brain. However, this was not the case with parents of toddlers and older children who were already verbal. For these mothers, there was little to no response from the recordings of IDS.

Researchers found that there are clear distinctions in how various groups of mothers process and generate IDS. This may be an evolutionary link for language transfer between mothers and children, something that is coded into our brains. During the crucial early stages of infant language, this simple style of speech opens the door to passing our language on to our children. – Summer, staff writer