Home » Study Finds 67% Of Can Lids and Liners Contain BPA

The issue of Bisphenol A(BPA) hidden in the way we store or transport our food products has been an issue for years.  A clear, tough plastic, it is used in a variety of common consumer goods, such as water bottles, sports equipment, CDs, and DVDs.  The chemical has been linked with a long list of health issues like ADHD, cancer, infertility, and high blood pressure – causing environmental groups to petition to have it be removed from any product that comes in contact with food.

And while many plastics that are used in baby bottles, food storage and teething products are now said to made without the dangerous chemical, a new study has found that it is still used in an “alarming” number of food can linings and lids. 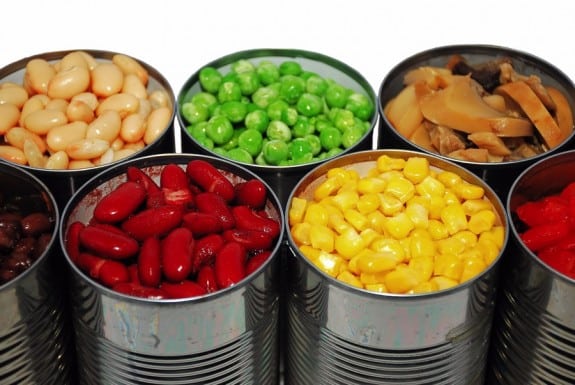 The report, titled “Buyer Beware,” was prepared by six environmental and health groups in North America, including Breast Cancer Fund, Campaign for Healthier Solutions, and the Environmental Defence in Canada, CTV Reports.

The groups analyzed the interior coatings and lids of 192 cans containing vegetables, fruits, soups, broth, gravy, milk or beans, and found that 129 of them, or 67 per cent, contained BPA-based epoxy in the body and/or the lid.

Of the cans that were collected in 19 U.S. states and Ontario, the study found,

When CTV News reached out to the the North American Metal Packaging Alliance, they noted that report “fails to address the critical issue of food safety and consumer protection.”

“Epoxy linings have provided a near perfect food protection system for close to 40 years,” the alliance said in a statement to CTV News.  “According to the U.S. FDA, there has not been a reported case of food borne illness from the failure of metal packaging in close to 40 years, or the equivalent of trillions and trillions of canned foods sold.”

They also noted that Health Canada does not have a concern with BPA use in food packaging. Their site notes:

“Health Canada’s Food Directorate has concluded that the current dietary exposure to BPA through food packaging uses is not expected to pose a health risk to the general population, including newborns and infants.”

The U.S. Food and Drug Administration mimics the same sentiment saying that BPA is “safe at the current levels occurring in foods.”

So if it was safe why would both agencies get behind a BPA ban on bottles for infants and children?

A study that conducted by Scott Belcher, an endocrine biologist at the University of Cincinnati found that when the polycarbonate plastics and epoxy resins made from the chemical are exposed to hot liquids, BPA leaches out 55 times faster than it does under normal conditions.

Because cans are often stored at room temperature, and rarely heated does that reduce your risk?

BPA leaches into cans as well.  In fact, during a 2014 study a team from Seoul National University’s department of preventive medicine recruited 60 older individuals to drink soy milk from cans or glass bottles on three separate occasions, weeks apart in an attempt to test for BPA leaching, and whether or not an increased amount of BPA could be linked to high blood pressure.

When the individuals drank from glass bottles, the study found, their urinary BPA levels remained fairly low. But within two hours of drinking from a can, their levels of BPA were about 16 times higher.

Interesting enough, as the BPA levels rose, so too did systolic blood pressure readings – on average by about five millimeters of mercury.

Currently no retailer has a policy in place to completely eliminate BPA in all of its canned food, the report says. Shortly after the report was made public Campbell’s announced it will transition to cans without BPA linings by the middle of 2017.  It started to

Del Monte started converting their cans over in 2009, and has said “nearly 100 per cent” of its vegetable products are in BPA free packaging. They are hoping to make the full transition starting with a new production this May.

In response to the report, Loblaws told CTV News the company “has been a leader in addressing ingredients of concern in our products, including recent commitments on triclosan, pthalates and micro beads.  Specific to BPA, we have altered products and packaging over the past few years with a primary focus on food for infants.  The safety of the food and products we sell to Canadians is of the utmost importance to us and to that end this work continues.”

The report also notes that products labelled “BPA-free” are not necessarily safe.  Manufacturers have also been called out for using plastic alternatives that also tested positive for endocrine disrupting chemicals.

In our house I buy fresh or jarred.  We do use some canned foods, but after reading too many of these reports I have cut that back to about 10% of what we used to use 5 or 7 years ago.  We also don’t have any plastic drinking cups in the house and I only store food in glass bowls. If I were to have another baby I would probably opt for glass bottles. The plastic just isn’t reliable.

“We can tell you that BPA is definitely toxic. What we can’t tell you is exactly what people are shifting to, or really what the impact of those chemicals are.”  Some BPA replacements are also hormone disrupters that have similar effects to BPA. Existing natural substitutes, like oleoresin (a combination of oil and the resin of plants) don’t always hold up for storing more acidic foods, like tomatoes.

The recommend subbing in fresh, frozen, or dried food for canned food; purchasing food in alternative packaging, like glass; and, if canned food is unavoidable, never heating food in the can.