Teaching your kids to swim offers a tremendous amount of benefits.  Not only does it build confidence and improve co-ordination, but it is a great cardiovascular workout. A new study has revealed that getting your little ones into the pool earlier may also help them to reach some of their cognitive, physical, and language developmental milestones earlier than their peers. 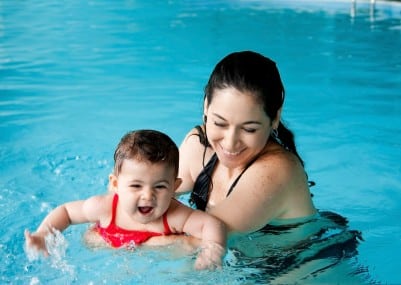 For their study, which has been called the world’s most comprehensive study on kids and swimming, a team of experts from the Griffith Institute for Educational Research, interviewed parents of kids aged 5 and under from New Zealand, Australia, and the United States, over a three year period. Researchers gave parents an inclusive list of milestones and asked them to identify their child’s achievements.

To remove the chance of parental bias, the scientists also observed the 180 children aged 3 to 5 who participated in intensive testing.

Lead researcher, Professor Robyn Jorgensen, noted that children who were taught to swim when they were young were able to learn a variety of skills before other children in their age group. “Many of these skills are those that help young children into the transition into formal learning contexts such as pre-school or school.”

Regardless of the family’s socio-economic background, the differences between the kids who learned how to swim and those who did not were significant.

In fact, researchers found that the two higher socio-economic groups performed better in the testing than the two lower groups, but in total all 4 groups had better scores than the normal population. Additionally, there was no difference in the results between boys and girls.

The researchers were surprised to find that these children also performed significantly better in visual-motor skills, including:

The focus group also had better scores in mathematically-related tasks and rated higher with their oral expression.

“Many of these skills are highly valuable in other learning environments and will be of considerable benefit for young children as they transition into pre-schools and school.”