Home » Study: Talking to Your Baby may Decrease ADHD Risks 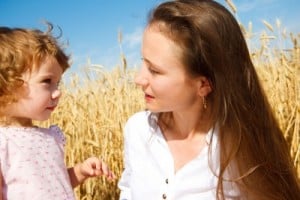 According to an article in the Washington Post, ADHD rates have risen 66% in the United States since the year 2000. And the US isn’t the only country struggling with rising ADHD rates. Yet despite the rising epidemic, there are still some questions about how we can protect children from the condition and why it even occurs in the first place.

To this point, research has indicated that ADHD – classified by impulsivity, lack of attention to details, difficulty in sustaining attention, and hyperactivity – may be a combination of nurture (parenting in the early years) and nature (genetics, environment, etc.). Unfortunately, there is little that can be done about the genetic aspect of ADHD. There is, however, some things that can be done to alter the nurture portion. A recent study from Scotland has discovered another one of those possible alterations that parents can make. The best part? It’s simple!

Set to publish in the journal Research in Developmental Disabilities, the study looked at hundreds of videos of 180 mothers interacting with their one-year-old babies. They followed these children until they reached the age of seven to determine whether or not the children were diagnosed with ADHD in life. After examining the data, researchers found that for every decrease of five vocalizations (everything from simple sounds to actual words) per minute from the mother, the odds of a child developing ADHD later in life increased by a whopping 44%.

“We used 180 vidoes for this study of mothers interacting with their 12-month-old infants – of which 120 were controls and 60 were of the children who were later diagnosed with disorders at seven years old,” study co-author Dr. Clare Allely, a psychologist at Glasgow University’s Institute of Health and Wellbeing told ABC.

But the study doesn’t mean that children WILL develop ADHD if they aren’t talked to, nor does it indicate that a child will avoid any psychological or psychiatric problems simply because their parents talked to them. Instead, the authors say that the action of talking to a baby may provide some sort of protective effect against conditions like ADHD.

“We have got the possibility that active parenting and active communication by the parents may have a protective effect against the development of problems with attention and conduct,” Phillip Wilson, study co-author and professor of primary care and rural health at the University of Aberdeen told ABC. “The other main hypothesis is to do with genetics. We know people who themselves have ADHD or conduct problems tend to be more under-active and communicate less later on in life. So the second possible explanation is that it may be the mothers themselves have ADHD and have become underactive and passed the genetic vulnerability to the children…My hunch is that it is somewhere in between the two and it has probably got both things. The child probably has to have some genetic vulnerability to these conditions on the one hand – but on the other hand more engaged and active parenting might be protective.”

So, in other words, parents shouldn’t feel guilty for not communicating with their child all the time. However, it may be something that parents want to make themselves more aware of. For example, when things need to get done around the house, parents could let babies spend an hour in a swing or bouncer seat or doing independent play. Then, when the task is finished or after the hour is up, parents can spend the same amount of time cuddling, playing with and communicating with baby.

This is extremely important, even despite the study. Numerous studies have indicated that the more positive, loving and interactive can be, the more likely the baby is to reap benefits from it later in life. This is partly because the baby’s brain develops rapidly during the first three years of life, but it is also because this is the time where attachments are formed. This is the time when babies learn to trust that those left to care for them will meet their needs. It is when they learn that their needs are valued and heard. Positive development at this time in life can often provide a cushion for many things that happen later on in life, and if the study is correct, this cushioning includes protection from some of the most common neurological/psychological conditions today.