A Texas newborn broke records and surprised many when he arrived weighing an unexpected 14 pounds and 13 ounces! 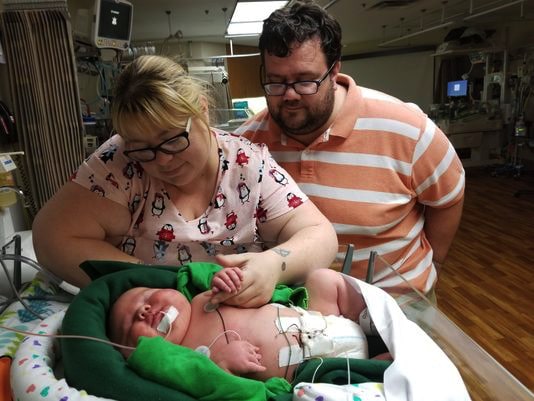 Image VIA Jennifer and Eric Medlock

Jennifer Medlock told USA TODAY she expected her new baby to be around 10 pounds, as daughter had been around that weight but, she was shocked when the doctors revealed her son’s weight.

Baby Ali was delivered via a scheduled C-section on Dec. 12. Jennifer had already had a C-section with her daughter and doctors likely thought it was the best idea considering her history of large babies.

Shortly after his birth, he was admitted to the hospital’s neonatal intensive care unit because of low blood sugar and platelets. Thankfully he improved quickly and was released home on Dec. 19.

Jennifer and husband Eric were told Ali is the heaviest baby ever born at Texas Health Arlington Memorial Hospital. A spokesperson for Texas Health Resources confirmed that information noting that Ali is the largest baby born at the hospital to their knowledge.

The doctor who delivered the baby boy said the newborn is the largest he’s ever brought into the world in his more than 30-year career, Jennifer said.