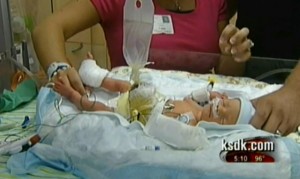 Even though he is only 2 days only, Mason Otten is already making news.

The tiny baby was born prematurely on July 22nd and is now in St. Louis Children’s Hospital where he is being treated for gastroschesis. Only one in 4,000 babies are born with this rare condition, which means that the intestines are outside of the body due to a hole in the abdominal wall.

The process for treating gastroschesis involves Mason spending quite some time in the NICU while his intestines are slowly placed back in his body. After everything is in place and the hole is sewn closed, little Mason will still need a feeding tube and may need other treatments including a hernia surgery, but overall the doctors and surgeons at St. Louis Children’s Hospital feel he will recover well. 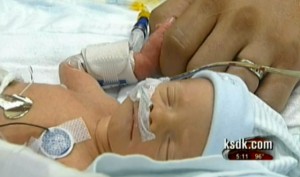 Kurt and Tina Otten, of Belleville, Missouri, were well prepared for their son’s condition, as it was discovered at twelve weeks gestation during a routine ultrasound. The couple had the opportunity to speak with experts and do their own research on the disorder well before Mason’s early arrival.

It will be a few months before Mason can go home with his proud mom and dad, but they are making the best of their time in the NICU. They are making a video for little Mason that shows them interacting with him and explaining his condition so that he will understand what he went through as a tiny four pound-four ounce baby. – Jill Staff Writer