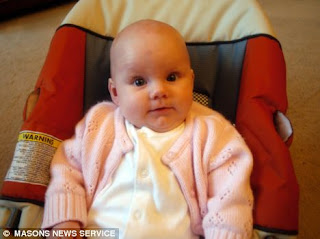 UPDATE: The BBC is reporting that this baby’s mom has been found and is under arrested on suspicion of child neglect. Police have said that, although the 25 year-old mom is under arrest, she is being offered support and guidance by a number of agencies.

The staff at Linconshire’s Grantham Hospital were shocked to find a baby, aged between two and four months, abandoned in her stroller in front of the accident and emergency department on Saturday.

The fair-haired infant named Amy by nurses has already been placed in the care of a foster family while authorities are appealing for her parents to come forward.

Authorities believe that the little girl had been previously well cared for and said her parents had nothing to fear by speaking to them.

They have released images of the baby and the clothes she was wearing in hopes that someone who knows the family will come forward.

‘The mother has gone through and is still going through a huge amount of emotional turmoil.

‘What we want to get across to her is that we realise that – and that there is a large amount of help and support available to her.’

‘It’s more likely that (the mother) is a local woman who gave birth at Grantham Hospital, but we cannot rule out that she has come from further afield.’

They are appealing to any one that was in the area at about 3pm on Saturday, and also to any taxi or bus drivers who may have given the baby’s mother a lift.

‘Our main priority at the moment is that we find out that the mother is safe and well and reunite her with her daughter,’ James Newell said today.

We hope this mom comes forward now that she has had some time to clear her head. Hopefully her family will come forward and offer some additional support.