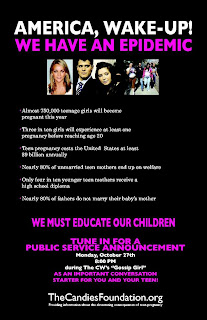 The Candie’s Foundation’s “America, Wake Up” (pictured right) PSA campaign to prevent teenage pregnancy was due to run as a full-page advertisement in USA Today until the publication rejected the ad because they didn’t want to offend their readers.

USA Today began by explaining that it did not want to offend its readers and subsequently changed and re-changed its position until ultimately rejecting the PSA late Friday afternoon claiming they downsized the paper and “could not accommodate the ad.”

The Candie’s Foundation debuted the new campaign in honor of October being “Let’s Talk” month, that encourages parents to speak with kids about sex and teen pregnancy.

“This is very disappointing. We are trying to get across an important message about the devastating consequences of teen pregnancy and one of the key publications to reach parents and families is USA Today. The fact that they deem this PSA as offensive further drives home the key problem that the media is not addressing this issue.”

The Foundation will still run their PSA television spot tonight at 8pm on The CW during the hit show, “Gossip Girl.” The goal of the campaign is to act as a conversation starter for parents to talk to their children about teen pregnancy prevention.