The Royal family is growing again! This morning Kensington Palace announced The Duke and Duchess of Cambridge expect their third child.

‘The Queen and members of both families are delighted with the news’, the release said.

The palace then went on to note that like with her previous two pregnancies, The Duchess is suffering from Hyperemesis Gravidarum. This has caused her to have to cancel some of her appearances.

‘Her Royal Highness will no longer carry out her planned engagement at the Hornsey Road Children’s Centre in London today. The Duchess is being cared for at Kensington Palace.’

Earlier this week Kate was photographed with William and brother-in-law Prince Harry meeting with representatives from charities supported by Diana, Princess of Wales, to pay tribute to the life and work of their mother the day before the twentieth anniversary of her death.

The Duke of Cambridge and Prince Harry, together with The Duchess of Cambridge, met with representatives from charities supported by their mother Diana, Princess of Wales, to pay tribute to the life and work of their mother the day before the twentieth anniversary of her death.

In the past, the palace has announced the pregnancy around 10-12 weeks. If that is the case this time, Kate is due in April.

The new baby will join the couple’s older children George, 4 and Charlotte 2. 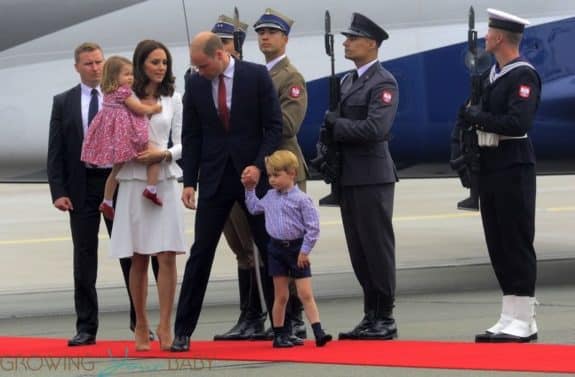 The family was last photographed together during an trip to Poland and Germany in July.