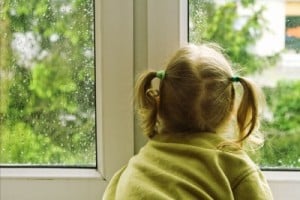 Most accidents that happen in the home to children can be easily prevented by simple childproofing precautions. One such danger comes from an over overlooked area of the home, the window blinds. Infants and toddlers can become tangled in the cords on blinds, and choke to death if not rescued in time.

So far this year, 5 toddlers have died from having the cords on window blinds wrapped around their necks. These cords can become instant nooses that are too tight for a small toddler to escape from. Within minutes a child can die from strangulation if they become entangled in such a cord.

Mother Tracey Clifford almost experienced that loss when her 3-year-old daughter became tangled in the cord. Thankfully, Clifford’s older son was nearby and able to call for help in time. The small girl was looking out the window at kids playing, slipped and fell, causing the cord to become wrapped around her neck.

“Beth’s feet were off the ground and she was gasping for breath,” recalls Tracey, 29, from Chesterfield, Derbys. “It was horrific. I tried to loosen the cord but it was too tight.

“I had to lift her up to prise it from her neck.”

Tracey and her husband Matt were shocked to learn that the cord on their blinds could be so dangerous. They had originally installed the blinds to keep the bedroom darker and allow their children to sleep longer in the mornings. They are not alone.

“Parents need to know just how dangerous these blinds are. Just a few seconds later and it could have been different.”

In the UK, a campaign by the Royal Society for the Prevention of Accidents (RoSPA) is warning parents about the dangers of window blinds and providing them with ways to make the blinds safer. Pamphlets on the risks, along with plastic safety tie, are being handed out to help parents keep the cords where they cannot pose a risk. When the cords are kept high enough, toddlers and infants are less able to become entangled in them.

The campaign is being backed by Angus and Kate McLaughlin, parents who lost their own toddler to a cord in 2008. The 2-year-old had climbed onto a toy box to wave goodbye to his grandmother. The toddler fell and became tangled in the cord. By the time she was found, it was too late.

Safety experts have window blind cords listed as one of the top five hidden hazards in the home. Though looped cords are no longer sold in the US and Canada, toddlers can still become entangled in cords that have knotted. – Summer, staff writer