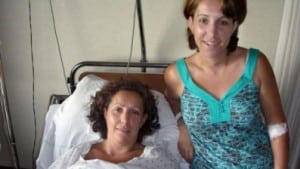 Karine Thiriot had wanted to be a mother for 15 years but a rare chromosomal disorder made pregnancy impossible. It was then that her twin sister helped her become a mother with an ovarian transplant, like this, happening for the first time in the world.

Karine and her twin sister suffer from a rare chromosomal disorder known as Turner’s syndrome. It is a condition that only affects females and leads to a missing or an imperfect sex chromosome.

In Karine’s case, the syndrome led to her being born without ovaries which happens in one on 2,500 girls. However, although her twin too had the same disorder, she was fertile and had already become a mother to two children.

Karine tried to get pregnant using in vitro fertilization for 15 years but the procedure was unsuccessful. It is then that doctors decided to perform the very first ovarian transplant that involved twins with Turner’s syndrome.

The operation was successfully carried out in August 2009.

“It was the first such transplant in the world between twins with Turner syndrome,”Belgian gynaecologist Jacques Donnez, said.

It was also the first ovarian transplant to be performed in Europe.

Baby Victoria was born on March 8 and to the relief of her mother and her aunt, she does not carry the abnormal genes causing the disorder.

The sisters that shared their birth now share the bond of motherhood too in a truly remarkable way. -Atula, Staff Writer