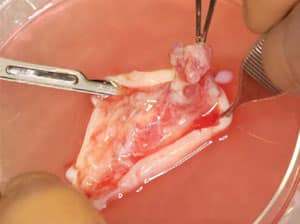 Doctors in Melbourne have, for the first time, conducted an Ovarian Tissue transplant technique to successfully re-store fertility of a 43-year-old woman after she had her breast cancer treatment in 2005.

Director of Monash IVF Gab Kovacs said his team had removed the ovarian tissue of the woman before she began her treatment in 2005 and froze it. This year they transplanted the tissue which allowed natural ovulation to start again. The woman is now six and a half weeks pregnant.

Ovarian tissue transplant is a revolutionary new technique that may provide hope to many women, especially those struggling with menopause or infertility. But the team of doctors says that for the moment it is being used only for women who have medical reasons to preserve their fertility.

Professor Kovacs added though that ovarian tissue cryopreservation had enormous potential for cancer patients and other women worldwide.

The 43 year old woman became the first in Australia and only the 20th women in the world to be given such a transplant.

“What this means is that a woman’s fertility can be preserved indefinitely.The whole concept of using it for social reasons doesn’t sit comfortably with me, so I’m not advocating for that, but it might have a place in preventing diseases that come with menopause such as osteoporosis.”

What the doctor also added was that the technique was not difficult to learn or execute and can be performed by any gynecologist.

‘‘The beauty of this technology is that a woman can see a doctor one day and have the tissue removed the next – there’s no delay. It’s simple and any gynaecologist can do it,’’ he said.

He learned the technique from Israeli fertility specialists. It involves key-hole surgery, usually through the belly button, to take a portion of the outer shell of the ovary which has eggs in it.

He says that a whole ovary could be removed as well, but that may reduce the woman’s chance of carrying a pregnancy.

‘‘This could be the way to go for women who want to preserve their fertility after cancer,’’ he said.

Different experts however have different opinion about the technique and using it to restore fertility in women.

Medical director of Melbourne IVF Dr Lyndon Hale said that he has frozen ovarian tissues of several patients though only one got pregnant and unfortunately suffered a miscarriage.

‘‘It’s still in the developmental stage so it depends on the particular circumstances in the patient,’’ Dr Hale said.

‘‘If people have chemotherapy, it may destroy tissue in the body but it may not. For some women who have had chemotherapy, their ovaries recover and produce eggs afterwards so they can get pregnant. So if you remove the whole ovary you’d be taking that opportunity away.”

Dr Hale said the tissue is sliced up thinly and treated with a biological anti freeze product so it can be frozen safely and then thawed and implanted back on to the woman’s remaining ovarian tissue. If the implant is a success than the normal ovulation cycle begins again.

What he adds more importantly is that though freezing ovarian tissue could be theoretically done for any woman who is approaching menopause and may wish to become pregnant later, Dr. Hale would not do so for social reasons.

‘‘It’s possible but I wouldn’t be recommending it to my daughters,’’ he said. ‘‘If we’re doing it for cancer we’re doing it for a crisis, an identified need, whereas the rest of it is probably trying to fandangle nature too much.’’

The transplant is an option for women of any age, but as previous cases clearly suggest, women with pregnancy after 50 suffer from various other complications and altering the natural cycle of ovulation and menopause may trigger all these other problems.

Some suggest that increasing hormone production when a woman would ordinarily experience menopause may carry an increased risk of certain cancers, such as breast and ovarian cancer.

‘‘We think there is a natural time to have babies and as you get older you get other medical conditions. It becomes an unsafe thing to do,’’ Dr. Hale said.

The present success, though, opens door for women who are cancer survivors as the ovarian tissue freezing can become an option to safeguard their fertility.