More to love!  Moses William Hilton surprised hospital staff last week when he arrived weighed in at a hefty 14.4 pounds and 22 inches. But what makes it even more extraordinary is that the newborn was almost 2 weeks early! 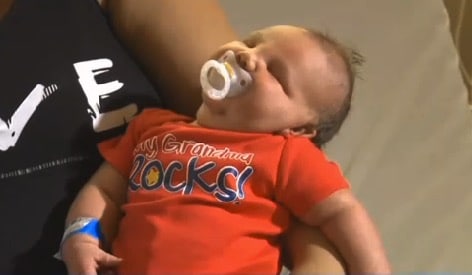 “When they took him out, the nurse said, ‘It’s a mini sumo wrestler.’ I said, ‘Why?’ Then they showed me him and I was like, ‘That is a sumo wrestler!'” The baby’s mom Gina Hilton told Kake.com

Moses is the third child for the mother whose daughters each weighed nine pounds.

“This little guy is about double what we expect a normal baby to be,” said Jill White, nursing director of the birthing center at Hutchinson Regional Medical Center.

“When you think of babies who would normally reach that 14 pound mark, they’re also starting to have a lot more neurological development, so that head control and body movement. He’s a newborn. He doesn’t have all that yet, so it does take a lot more to hold on to.”

Baby Moses had blood sugar issues and jaundice, which may indicate that Gina has gestational diabetes, a common cause of large babies. His parents hope he will be able to join his big sisters at home soon.