Home » According To Survey Toilet Training Should Be By 24 Months 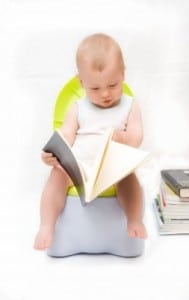 An Australian survey found that half of all toddlers are not toilet trained by the time they are 3-years-old. However, the best time to toilet train a toddler is between 19 and 24 months the results show.

The survey, Toilet Training of Infants and Children in Australia: 2010, is part of the The Restraint Project out of the University of NSW. It began from growing concerns about the impact of disposable diapers and the environment and the contamination that bodily waste poses in the trash. Anna Christie, the creator of the survey, proposed that children were being toilet trained up to a year later than earlier generations because of “underskilled parents, wrong-headed ideas.”

The survey has support from some experts, such as Robin Barker, author of The Mighty Toddler. Baker agrees that children were meant to be in control of their bodies by 3 years of age.

Toddlers want independence. And [delaying toilet training] flies in the face of all this other stuff we go on about with young children. We want them all learning the violin and reading … but they’re not potty trained.

In comments, Baker pointed out that her comments were based on her experience rather than on research. However, Christie beleives that later toilet training leads to many issues. – Summer, staff writer