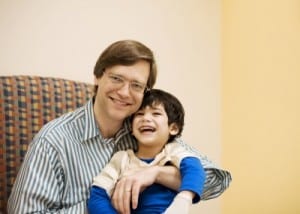 Children with cerebral palsy struggle with range of motion and everyday tasks that many of us take for granted, like walking, running or playing outside. Intensive physical therapy can help to trigger neurological connections to help the body and brain work together better; the more therapy and practice they have at moving their muscles correctly (or as close to correct as possible), the higher their level of functioning can become.

Of course, physical therapy can’t be a round the clock activity. And practicing at home or school may become tiresome, difficult and strenuous. But like most difficult things, finding a way to make it fun just might entice them to practice those movements just a little longer or a little more often. One acceptable way to make it fun while encouraging full range of motion? Active video games (like Nintendo Wii).

Lead researcher Elaine Biddiss, Ph.D. of Toronto’s Boorview Research Institute at Holland Bloorview Kids Rehabilitation Hospital and the University of Toronto Canada had this to say:

“Active video games provide a low-cost, commercially available system that can be strategically selected to address specific therapeutic goals. While our results did not show that active video game play can be regarded as a replacement for more vigorous physical activity or muscle strengthening, we found that some games may provide targeted therapy focused on specific joints or movements.”

This statement came after Biddiss and her colleagues examined 17 children with cerebral palsy during active video game play. Four games were selected for the study: Wii Boxing, Tennis, Bowling and Dance Dance Revolution. Researchers recorded data on the energy, muscle activity and motion used while playing each game. Children also completed a survey on how much they enjoyed playing the games.

According to the survey they took, children enjoyed the games overall. Because the games are enjoyable neuroplasticity may be further encouraged and the children also receive on-screen feedback, helping them improve their movements for an extrinsic reward.

“Wii boxing, or similar games, may be an effective motivational environment for encouraging increased movement speed of the hemiplegic limb, in addition to the bilateral use of the limbs, because in-game success is strongly linked to these two metrics,” said Dr. Biddiss.

“While not a replacement for structured exercise and physical therapy, advanced video games may encourage children with cerebral palsy to be physical active and to practice complex motor activities,” said Dr. Biddiss. “There are many opportunities for further research. Further development and optimization of active video game technologies may usher in a new age in physical rehabilitation where virtual environments provide an arena for neuroplastic change in the comfort of one’s home.”