Home » Are You A Distracted Driver?

Now, more than ever, there are a million things that distract us when we are driving. The radio, our phones, and our kids! Taking your eye off the road for just a second can be fatal for you, a pedestrian, or a fellow motorist. 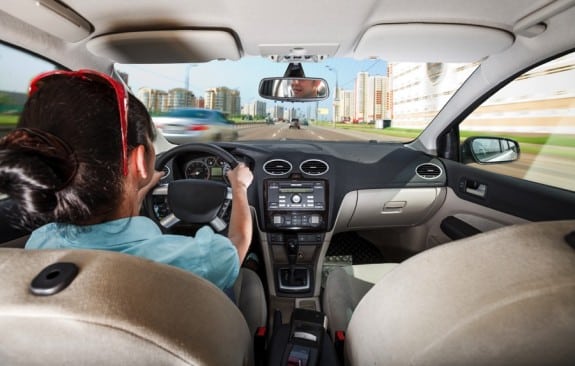 While in Texas last month with Cooper Tire, I had the chance to do a distracted driving course with a professional driver and a couple of pesky little passengers that were ‘bossing me around’ – just like my own kids do – as part of the exercise.

It wasn’t until I was in the car, and going through the course that I realized how many things I instinctively do while driving.

Check out the video of me on the course below.  Note that one of my passengers is shooting Nerf Darts at me and hurling stuffies at the windshield.  And of course, it started to rain…

What’s the biggest distraction? Your phone! ‘Drivers engaged in text messaging on a cellular phone are 23 times more likely to be involved in a crash or near-crash event compared with non-distracted drivers.’ – CAA

While at the event I met a 19-year-old Tristan Nunez, Mazda’s Indy Lights driver, who has made it his mission to create more awareness about texting and driving.

‘11% of all drivers under 20 involved in fatal crashes were reported as distracted. This age group has the largest proportion of drivers who were distracted.’ NHSTA, 2012

This handsome guy, @tristannunez70, is a professional race car driver with the Mazda Racing Team. At 19 he's the youngest in the field and he's championing a really inspiring #dnttxtndrv campaign. #CooperRND

For the past few years, Tristan has traveled around the United States visiting high schools, speaking to students about the dangers of driving while texting.   Did you know that 60% of drivers use cell phones while driving? That’s a crazy stat.

In April he teamed up with Cooper Tire to raise awareness about the distracted driving epidemic.

As parents, it’s important to set a good example. So put your phone on silent, throw it in your purse/glove box, or designate someone else in the car to do your texting if you need to send a message.