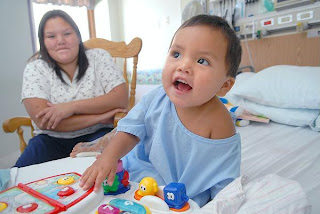 19-month-old Adriano Wah wasn’t fazed when a rattler attacked him from beneath his toy grocery cart, puncturing his leg with two fang wounds.

He didn’t get frightened until strangers gathered around him for a morning-long odyssey last Tuesday. In an attempt to pick up cell-phone signal, Adriano’s parents drove him to the top of a near-by point. An ambulance arrived and the toddler was airlifted to Flagstaff Medical Center.

Thanks to the quick response and the work of FMC’s pediatric intensive care unit, the strong tot is expected to make a full recovery.

“If they didn’t make that choice, he would have most likely lost his leg,” said Winona, who also has two daughters, ages 4 and 10.