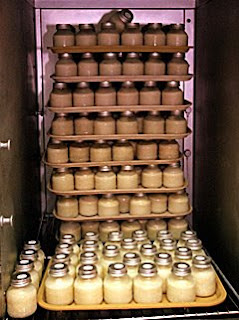 A gourmet chef’s plans to whip up a number of delicacies using human breast milk have changed after authorities stepped in and threatened lawsuits against the chef and any potential donor willing to pump for cash.

Hans Lochen, proprietor of the Storchen restaurant in Iberg, Switzerland, advertised in German newspapers seeking women willing to sell him their milk, offering about 10 pounds per liter of milk.

The crazy chef had been doing a little private recipe testing, he claims. Preparing such entrees as breast milk lamb curry and antelope steak with chanterelle sauce spiked with cognac and breast milk had drawn rave reviews: his friends loved the creamy entrees, Locher says.

Swiss officials were surprised by an apparent loophole in the regulations which did not seem to address the issue of cooking with breast milk. The authorities ruled that Locher would not be able to store the human milk properly nor guarantee that it was fresh and safe for consumption.

They threatened lawsuits if he proceeds with the plans of introducing the novel recipes to the public. Locher nursed his bruised ego by making it known that he didn’t understand what all the fuss was bout.

“I don’t understand all the controversy,” he said. “The mother’s milk is the most natural thing in the world – how can anyone be against it?”

Ughh… Breast Milk really? The thought of it throws me off and I am pro-breast feeding. If he was allowed to prepare his original recipes, would you eat at this restaurant?