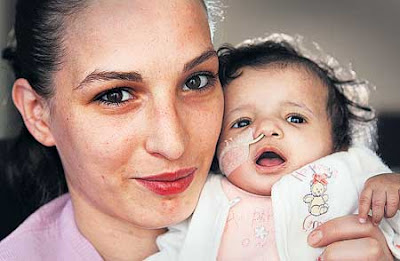 If you saw Suraya Brown you would think that she was just born a few weeks ago.

The problem is that the brown-eyed toddler is now 14-months-old yet she is still the size of a newborn baby, tipping the scales at just over 7lb and a mere 19in.

Suraya has been examined by a whole team of specialists including pediatricians, nutritionists, geneticists and hormone experts.

But doctors say they still have no idea why she won’t grow – describing her condition as a “real conundrum”.

Suraya’s mom, Atlanta Ruzman, 24, said yesterday that doctors have even consulted international experts about her case, but her condition seems to be a complete mystery.

“She cannot sit, talk or crawl and she has to be fed through a tube to keep her alive. But she just hasn’t been putting on any weight.”

“She is way behind other youngsters of her age and when they mark her growth chart they have to plot her off the graph. She is a just like a real-life doll. In fact my other daughter has a doll that is bigger than her.”

Over the next three months doctors will investigate a theory that her body has become resistant to its own growth hormones.

“She is a very interesting little baby.

“The fact that she still did not grow after we put the feeding tube directly into her veins was unexpected and surprised us greatly.

“This is incredibly rare. We have run many tests but we haven’t had a firm reason as to why she is not growing.