Home » Born with a Tumor on her Face, Baby Girl Fights to Survive

Twelve-week-old Miley Buchanan has been fighting for her life, since she was born. The baby girl has a cantaloupe sized tumor on one side of her face and doctors are still puzzled about how to treat the baby and save her life. 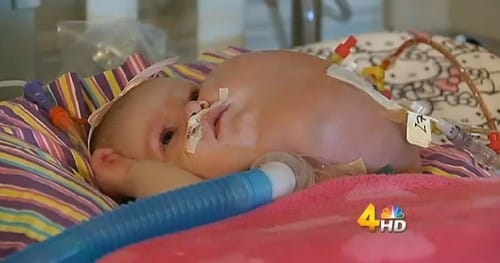 Russell Bibee, Miley’s dad hopes doctors can find a cure for his daughter. The baby was born with a condition so rare that doctors have only seen about 150 other cases.

“This mass is all on the inside of her mouth, down her throat. It’s got her tongue pushed over to one side, and her mouth is just filled with this mass,” he said.

One side of the baby girl’s face is okay, but the other side has the outgrowth so large that it is dwarfing her infant body. 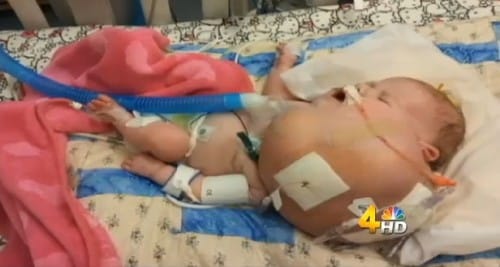 “They’re scouring the countryside, as far as I know, to try to come up with answers or do some research to figure out what can possibly be done for her,” Bibee said.

For the time being doctors are inserting medicines into the tumor every four weeks. They hope that the medicine will shrink the sac inside the tumor but to date, it has not helped much.

“Nothing, so far, has been really successful. None of the treatments or the procedures that they’ve done. They’re talking about surgery,” Bibee said.

Surgery is the last resort though for the Robertson County family as that would mean that baby Miley may lose her ability to make facial expressions. It may also damage nerves and muscles or affect her thyroid.

“We don’t know when or what to expect. The doctors really don’t know that to expect,” Bibee said. “We were talking about our hospital bill, and she’s definitely going to be a million-dollar baby.”

It already has been three months of hospital bills for the family. Although insurance will take care of that, Russell is still concerned about the things like gas, hotel rooms and meals near the hospital over an extended period of time. 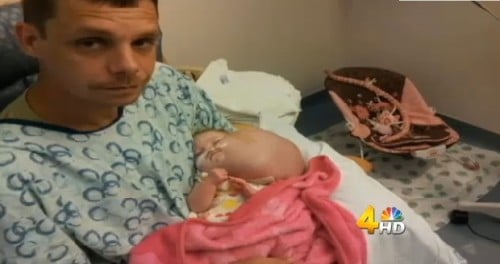 “It’s sort of like the doctors are fighting a never-ending, never-winning battle with this,” he said. “We’re holding on as a family and doing the best we can under the situation.”

If you would like to help Baby Miley, a fund has been set up at Regions Bank under the name of Miley Buchanan Fund.

Hopefully this little girl’s fight will have a happy ending with doctors curing her tumor soon.