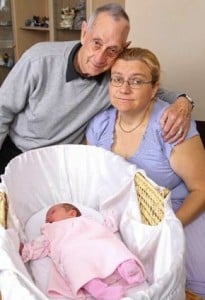 Just months after fathering a daughter at 78 Britain’s oldest dad, Dennis Ealam, has passed away leaving his wife, 40 years his junior, with three young kids under 4.

During an interview last Summer Dennis told The Daily Mail he was “thrilled to bits” about the birth of his latest child Violet but admitted, “I’m too old for any more.”

The couple hadn’t planned for baby #3 and were surprised when a test revealed his wife Cora, 38, was expecting.

I was on the pill so it was a massive shock. But these things happen and although it will be difficult we wouldn’t change a thing.

In total Dennis was father to 8 children; five from his previous marriage and the family doesn’t stop there. He also had sixteen grandchildren and three great-grandchildren.

Knowing she would outlive her husband Cora said in the interview last year she takes ‘the knowledge in her stride’.

‘I know Dennis won’t be here forever and it’s sad that he will miss his children growing up and maybe having families of their own.

‘But I take comfort in the fact that when he does go, I will have our children here looking after me.’

We hope the children are able to remember their father through the images and memories they created while he was alive.