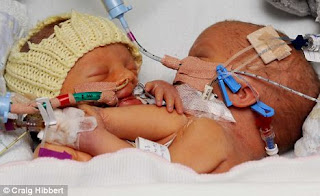 I am sad to report that one of the conjoined twins that was born to Laura and Aled Williams last week has lost her fight after being separated yesterday.

Hope Williams died Tuesday night. Her lungs were too small to support her breathing, the lead doctor said.

“She requires support for her breathing but she is gradually improving,” Pierro said. “However, it is early days and complications can occur.”

It was originally hoped the operation to separate the girls could be done when they were older, but Pierro said the children’s health had been deteriorating.

“This was an emergency operation because there was a blockage in their joint intestine which could only be resolved through surgery,” he said. “The technical surgery worked well, although it was extremely challenging, and went according to plan.”

More than 20 doctors, nurses and other health professionals were involved in the separation.

We wish the family well and hope that the remaining baby is strong enough to recover from this surgery. Related Articles: