The Dailymail has the amazing story of Emily Bland and one-year-old orangutan Rishi.

The two met at an animal centre while the toddler was there visiting with her father. 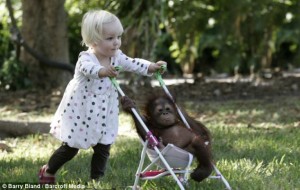 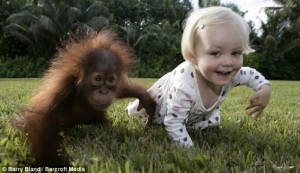 Taking to each other right away, the two spent hours tumbling about and having a tea party. Emily poured while Rishi waited patiently, gripping his spoon in a hairy fist.

‘I had come along to the institute to photograph Rishi and I thought it would be good to bring Emily.’

‘Almost as soon as we arrived, Rishi had an instant chemistry with Emily. They looked completely content with each other.’

Rishi was brought over to T.I.G.E.R.S from Jungle Island because he was a young boy,’ said Dr Bhagavan Antl the director of the facility.

‘He couldn’t stay with his father or the other male orangutans in the habitat because they throw the boys out.

‘But he is now been fully accepted into his new group. He sleeps with them and he stays side by side with them he is when them all the time.’

Rishi will now stay at the institute where he will become part of the animal ambassadors program, participating in education and conservation presentations at Myrtle Beach and Jungle Island institutions.

Other Cute Kids and Animals: