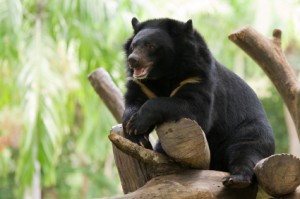 A fun visit to the Luenebach zoo in Southwest Germany turned nightmare for a family when their three year old daughter fell into the bear’s cage.

While visiting the zoo with her parents and a sibling, a three-year-old girl managed to climb a one metre (three foot) fence and fall into a bear enclosure at the private zoo.  Her 34 year old father immediately climbed after her, but the angry 28 year old Asiatic black bear had already hit the girl’s forehead.

The father reached his daughter and was able to save her, but not before the bear had injured his leg too.  Both father and daughter were taken to a hospital in Trier and treated for non life-threatening injuries.

Luenebach Zoo opened 38 years ago and has many wild animals including monkeys, tigers, and lions. Isabelle Wallpott, whose family owns the zoo, said after the incident ‘We are all shocked. In any case, we will take additional precautions to prevent such a thing from happening again.’ She did not give any more details.

“What remains certain already is that the family from the Dutch province of Zeeland had a large portion of luck to go along with their bad luck.”