Doctors at Assuta Medical Center in Ashdod were surprised earlier this week when it was revealed that a newborn was born with an embryo inside her stomach. 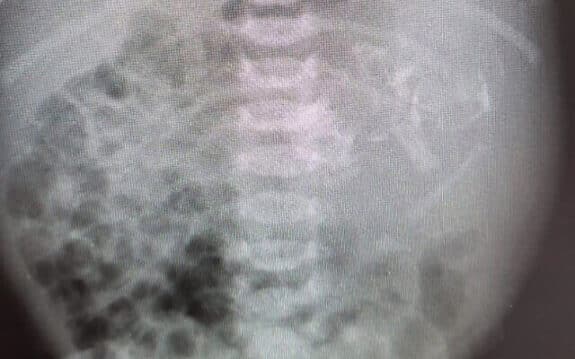 The condition, called fetus-in-fetu occurs only about once in every 500,000 births.

An ultrasound taken at the end of the pregnancy had identified that the baby’s stomach was enlarged.   Shortly after her birth ultrasounds and an X-ray confirmed that there was something inside the newborn.

“We were surprised to discover that it was an embryo,” Omer Globus, director of neonatology at Assuta, said.

A team of the medical center’s top experts carried out the operation, eventually removing two similar sacs from the girl’s stomach.

“We think that there was more than one there, and we are still checking that,” he said.

The remains, he said, were not a fully formed embryo, but rather an embryo that only partially developed. Doctors were only able to see some bones and a heart.

The operation was successful and the girl has already been sent home.

The condition occurs when the pregnancy starts off as twins but then one of the embryos is absorbed by the other.

“It happens as part of the fetal development process when there are cavities that close during development and one of the embryos enters such a space,” he said. “The fetus inside partially develops but does not live and remains there.”