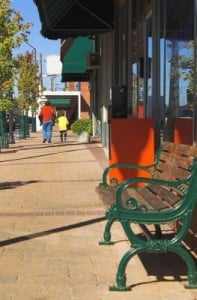 Ready, set, shop!  The ‘golden quarter’ has begun and retailers from coast-to-coast are vying for a chunk of the change that’s flying around, now that holiday shoppers have embarked on their annual spree.

Falling squarely within the spending mayhem flanked by Black Friday and Cyber Monday, Small Business Saturday is an initiative, spearheaded by American Express, to encourage shoppers to spend, at least some of their holiday dollars, in small local businesses – those little treasures we all have in our communities.

But, big multinational or small local business, what difference does it make where you spend your money?  I was interested to learn that there are a number of spin-off, economic benefits to supporting local companies.

According to Kenneth Chenault, chairman and chief executive officer of American Express, “Small business is the engine of job creation in the US economy.”  But he added, “It is also among the sectors hardest hit by the recession.  By spreading the word about Small Business Saturday, we can help raise awareness about the critical role small businesses play in cities and towns across the country at a time when they need support the most.”

Mr. Chenault goes on to add,

“Small businesses are critical to the nation’s overall economy.  According to the U.S. Small Business Administration, there were nearly 28 million small businesses in the United States last year.  Over the past two decades, they created 65 percent of the net new jobs.  Their importance to local communities extends even further.  For every $100 spent in locally-owned, independent stores, $68 returns to the community through taxes, payroll and other expenditures, according to the small business advocacy group The 3/50 Project.”

We’ve all seen a favourite local business fold.  Where I live, there was a fabulous single screen movie theatre, that only showed independent films, foreign films, and cult classics – all the movies the big theatres weren’t showing.  It was fantastic; I was really excited about it.  Unfortunately, despite my intentions, I only went twice.  It went under and I’ve been kicking myself ever since.

“Small businesses are the backbone of our economy and the glue that holds communities together, and we’ve always sought new ways to support them – something that became even more important when the national economic downturn began.  When Ken Chenault told me about his idea for Small Business Saturday, I jumped at the opportunity to participate.  We’ve all heard about Black Friday and Cyber Monday.  This year, if you have the opportunity to shop on the Saturday after Thanksgiving, make it a point to visit local small businesses.  It really can make an enormous difference for merchants trying to succeed.”

American Express has a host of partners helping to make Small Business Saturday a success.  Visit their website http://smallbusinessaturday.com to learn more.

At this time of year, we parents are crazy-busy.  We’re decorating, baking and running through shopping centers clutching our children’s letters to Santa as shopping lists.  In the process, we’re spreading the wealth around.

Instead of battling the crowds at the mall, on Nov. 27th, why not take a trip downtown.  You may discover a new favourite shop or restaurant.  You’ll get some shopping done and might find something different for the person, on your list, who has everything.

Make a day of it!  Enjoy a shopping adventure and pat yourself on the back for helping your local community to thrive. – Jen R, Staff Writer