Home » Judgment of Character in Infants Now Up for Debate 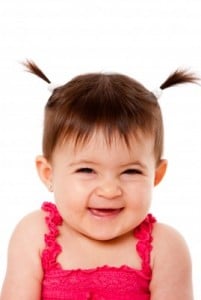 In the original study, groups of 6-month-old and 10-month-old infants watched various puppet shows wooden figures were used to represent three characters: the helper, the hinderer and the climber. The climber was trying to get up a hill. The helper would assist the climber to the top. The hinderer would push the climber back down the hill.

After watching the shows, infants were presented with the helper and hinderer puppets. In the 10-month-old group, 14 out of 16 babies preferred the helper puppet. In the six-month-old group, all 12 babies chose the helper. Based on these results, researchers implied that the infants are good judges of character. Their study was published in the journal Nature.

Researchers in New Zealand reviewed videos of the previously mentioned study, and they say that there are two other factors, besides being able to judge character, that could have driven the infants’ choices.

So Scarf and his team decided to conduct their own study. Published in the journal, PLoS ONE, New Zealand researchers tested their assumptions regarding the reason why infants made the choices they did in the original study. Their findings suggest that infants made their choices based on visual fulfillment rather than the character of the puppets themselves.

Hamlin supplied a response in the online journal. She says that the New Zealand study fails to negate the original findings because of the methods used. For example, the climber’s gaze is usually pointed downward, unlike the climber in the Hamlin experiment, in which the climber’s gaze is always pointed upwards. Hamlin says that this creates confusion about the intended goal. She also pointed out that the message is even further confused by the fact that the climber always resumes its ascent before being contacted by the helper, “as if to climb the hill on its own,” adding, “Finally, and most strangely, during the Hindering events, the Climber starts to move downwards before the Hinderer makes contact, further clouding its intended goal.”

Hamlin says that all of this confusion may have made it rather tricky for the infants to know when the climber needed help and who was actually helping. As such, the infants may have looked to other variables, like the collisions and bouncing, to give them clues when making their decisions. Furthermore, Hamlin says that, even if there were flaws in the original study, other independent studies have also indicated that infants do have a sort of “moral compass.”