Regardless of how old your child is, they continue to learn the same way through physical, cognitive and social-emotional development.  And while these three are relatively different, they affect one another.

From learning to hold a toy, to mastering its operation, kids are always learning through play.

Now that my boys are 3 and 7, the way they learn while they are playing is different.  When a new toy arrives for testing I get them involved from the get-go with installation and set-up.  For them this gives them a sense of accomplishment because they feel like they have built the toy they are playing with.  It’s also good because they know how to put it back together if a part comes off!

We recently received the Little People® Wheelies™ Loops ’n Swoops Amusement Park™ to review.  Excited to play with it, they were just as thrilled to help me put it together.  Most pieces snap together, but there are some screws involved so parents should expect to have their tools handy for installation.

My oldest picked the pieces while the little one helped me put everything together.  Not only was it a great system, but the kids loved being involved and best of all, there wasn’t one fight between the two of them because they were both working for the payoff – getting to play with their new ramp set.

Once together, they took turns flying their wheelies (and any other car they could find) down the loop de loop.  It was definitely a hit with them and me.  Looking at the slope the cars have to travel down and the loop they needed to go around, I wasn’t sure it would happen they way it should.  But I was wrong.  Every single time they put a car down that ramp, it stayed on the track and made the loop before flying out onto the floor followed by cheers from both of them.  Impressive. Plus there is a second ramp for one to play on if the other is hogging the loop! 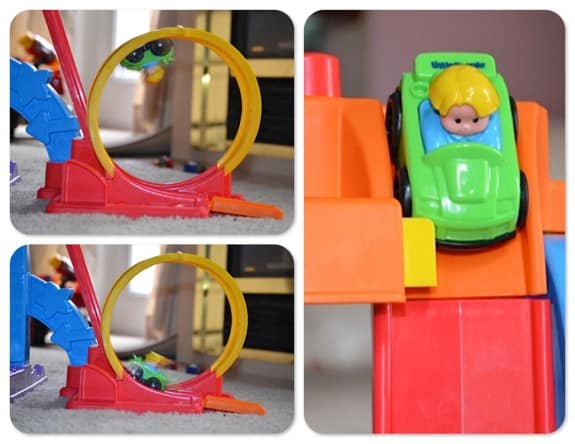 This set is somewhat similar to Fisher-Price’s Stand ’n Play™ Rampway so its inevitable that parents will ask which one to chose if they could only buy one set.  Because we have both I would say the Loops ’n Swoops Amusement Park because of the ‘Loops ’n Swoops’ part.  It really is a hit and not just with my boys, also with every child who comes over to visit.  They don’t even glance at another toy when they walk into the room, they just head right over to the amusement park and start to run their cars down the track.    They can race, just like with the rampway but just know the loop will always win..

Sharing, teamwork, problem solving and having fun together are some of the lessons I enjoyed watching the boys learn together. How do your kids learn through play?

“Disclosure: I am a Fisher-Price Play Ambassador and I receive special perks as part of my affiliation with this group. The opinions on this blog are my own.”
[ad]