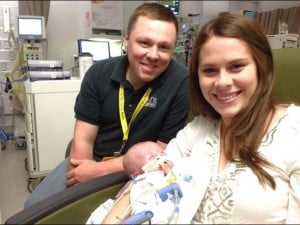 Like most parents, Jessica and Josh Swainston were excited to discover they were having a baby. But when they went to their first prenatal appointment, the Swainstons were given some heartbreaking news about their soon-to-be third child. Doctors didn’t think that the baby would survive through the pregnancy; they told the couple to prepare for a miscarriage.

Miraculously, when the couple went in for a 12 week checkup, doctors discovered that their little boy had actually grown, despite all odds. But then, at 21 weeks, the Swainstons found out what had caused concern at their very first ultrasound. Their baby had a congenital diaphragmatic hernia (CDH).

Affecting about 1 in 2,500 pregnancies, the condition causes a malformation of the diaphragm. In turn, the abdominal organs start to push themselves up into the lungs. Though doctors have learned how to better treat the condition, and morbidity rates have dropped, it is still considered a serious cause for concern when diagnosed.

Sadly, upon his delivery on July 10th at the University of Utah Hospital, the couple learned that the little boy they named Max was worse off than doctors had predicted. Given less than a 50 percent chance of survival, one of Max’s lungs was the size of a nickel, and the other one – his good one – had a leak in it. Heart weak, the tiny newborn also had an infection somewhere in his body. All of this was in addition to his hernia. In short, doctors expected the worst.

“They were taking him over to Primary Children’s Hospital right after he was born,” Jessica told KSL.com. “They wheeled my hospital bed over to the NICU window and told us to say our goodbyes. The doctors didn’t expect him to live very long.”

But, just like when his mother was pregnant with him, Max has continued to defy the odds at almost every turn. 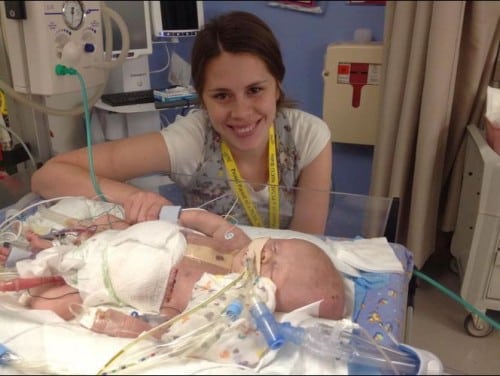 “At one point, he went into cardiac arrest for 15 minutes,” Jessica said. “We just watched the doctors work and thought this might be it. But Max pulled through and is still with us.”

Now dubbed “Miracle Max” by his family, the little boy continues to improve. He’s been taken off some of his medications, and doctors are now monitoring his lung function to see how things go. While he may not be out of the woods yet, it seems there might very well be a chance that he’ll pull through.

But the family says, for now, they’re just taking it one day at a time. Prepared for the long and difficult journey ahead of them, they say they’re taking the time to enjoy the small miracles as they come.

“I got to hold Max for the first time after waiting 44 days,” Jessica said. “I never realized how much I took for granted holding my first two boys right away. We still have a really long road with Max, but we are so grateful for the miracles we have seen.”

Local representative for a national group called Cherubs, a CDH awareness organization, Josh Hensley and his wife have lost two daughters to CDH. He says it’s more common than people realize, and his organization’s goal is to educate while offering support to families affected by the condition.

“CDH occurs 1 in every 2,500 births in the United States. That rate is about the same for babies born with spinal bifida. We’re trying to raise awareness of CDH and help get more support for people who get the diagnosis,” Hensley told KSL.com. “We hear of people, when they find out their baby has CDH, have no idea there are so many other parents who have children with the same thing. What we really want to tell people going through this is ‘You’re not alone.’”