Stacy Martinez, 25, had just given birth to twin girls via Cesarean when she suddenly became unresponsive. Staff quickly learned that Stacy had developed an amniotic embolism. It had stopped her heart and, at best, she had only a 40 percent chance of survival. 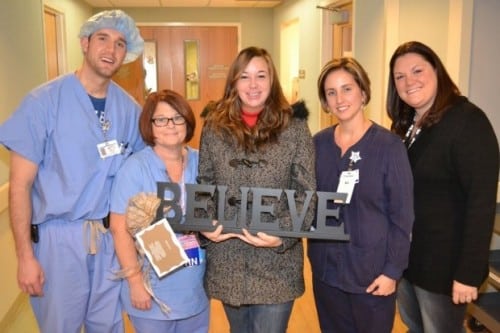 “The patient and her friend (Stacy’s husband is in the military and he wasn’t able to join her until later on) were chatting right after the delivery when things suddenly went bad,” Kathy Podorsek, unit director at St. Anthony told Cedar Lake Community News. “A code was called. Kim and Kelley, both Neonatal Intensive Care Unit Nurses, and OB nurse Sheila Steward, alternated doing CPR.”

After intubating Stacy and restarting her heart six times, Stacy was taken to surgery. She was then transferred to the University of Chicago hospital. The whole time, staff prayed for her and gave her words of encouragement.

“All of us never stopped praying for you,” Kim Federico, one of the registered nurses that had helped Stacy pull through said during her heartfelt reunion with Stacy. “I never wanted to see a mom again as much as I wanted to see you. I kept telling you, ‘please don’t go, you have two beautiful new daughters.’ You are our miracle.”

While waiting to hear back on Stacy’s status, the staff said that they struggled with sleeping, eating and concentrating. But Stacy pulled through, miraculously, and was discharged just four days after her transfer to the University of Chicago hospital.

Now Stacy is back home with her husband and children – the twins, Mila and Scarlett as well as two older children, Jacob, 3, and Lilliana, 18 months. And after the ordeal, her husband, Jason, has been permitted to transfer his home base from Texas to the Chicago area.

Stacy says that, even though she doesn’t remember the ordeal, she’s amazed at the sheer number of people who’d prayed for her and helped her pull through.

“It sounds like the story of someone else,” Stacy told Cedar Lake Community News. “We’ve always had a strong faith, and what happened has made it stronger. So many people I don’t even know cared so much. I am so touched, so grateful.”

And Stacy made sure she told the staff in person during the reunion.

“I want to thank you guys for saving my life,” Stacy said through tears. “I wouldn’t be here if it wasn’t for you.”

During the reunion, staff presented Stacy with a specially made “BELIEVE” symbol with some inspirational words attached. But the staff refuses to take credit. In fact, they give all the credit to a “higher power” and they say that they simply witnessed what “was very much a miracle.”