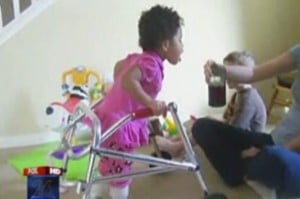 Five-year-old Lakay Roberts has cerebral palsy. Since the age of two, a walker has been used to help Lakay get around. Her pediatrician recommends that she use the walker until she becomes too tired to do so.

She has used it at home and at school, daily, for the last two years.  But then, a couple of weeks ago, New Caney ISD, the school Lakay attends during the day, informed Kristi Roberts, Lakay’s mother, that the walker could no longer be used.

As you might imagine, denying Lakay the use of her walker at school has Kristi outraged. And she has a right to be angry. Forcing Lakay into a wheelchair all day will actually cause regression, making it even more difficult for her to reach her full potential.

“The more she puts pressure on her feet, the more likely she’s going to be able to walk,” Kristi said. 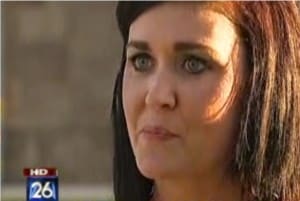 Kristi says she isn’t going to take it lying down. She plans to fight for her daughter as well as other special needs children like Lakay.

“She’ll never be typical, but she’s Lakay,” Kristi said. “And she can be the best she can be. I want things changed for her and for everyone else.”

Kristi has planned to take the matter to court, but right now, she says she doesn’t have the funds needed to hire a lawyer. She does, however, have a video recording that she has uploaded to YouTube.

This recording was made while meeting with Gary Lemley, the school district’s special education director. The recording is a full 40 minutes long, but only a two minute portion of it was placed on YouTube. The following is an excerpt of that conversation:

“Why can’t she use the walker?” Kristi asked.

“Basically, she can’t use the walker because we don’t think it’s safe,” Lemley said.

“Why isn’t it safe?” Kristi asked.

“I just told you, we don’t feel like it’s safe any longer,” Lemley said.

“Why? Why isn’t it safe after two years of using it?” Kristi asked.

According to Lemley, Lakay fell in the school’s parking lot. Kristi says she was with her daughter when the fall happened and the walker had actually collapsed.

“How many kids fall down at recess? Do you make them take their shoes off and buy new ones?” Kristi asked.

“Are you being discriminatory?” Kristi asked.

“No ma’am. I’m not being discriminatory,” Lemley replied.

“Yeah, you are,” Kristi said. “Taking a walker away from her after two years of using it because you want to strap her in a wheelchair because it’s easier.”

“We’re going to not do what the mother wants us to do. Be sure and get this on tape. You’re not concerned about Lakay,” Lemley said.

“You’re not to be rude to me, period. I am a parent, and you are an employee who is supposed to be an advocate for this child. From day one, you have not,” Kristi said.

“It’s up for a court to decide then,” Lemley said. 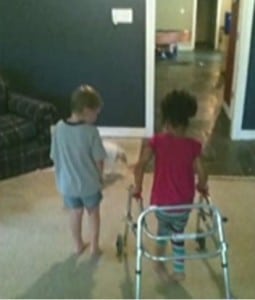 Kristi’s YouTube video has had more than 10,000 views in the couple of weeks it’s been up. Support and encouragement for the mother, and for Lakay, is pouring in. In fact, Kristi says she has received so much support that it’s actually a little overwhelming.

“I don’t want this at all. I want Gary Lemley to resign,” said Kristi, adding, “I’d like an apology, and I would like her to use her walker again and get things changed in the special education department.”

But advocates are hoping to provide her with the support she needs. They are telling her not to back down.

Ana Calvo, just one of the advocates now in her corner, is the president of the Ms. Wheelchair Texas Foundation. Calvo was born without arms and legs and she understands the laws regarding special needs children.

“The law states she has the right to go to school in the least restrictive environment, and if that’s a walker that’s her accommodation to get from point A to point B, then that is what she needs,” Calvo stated.

Kelly Klein, the development director for Easter Seals of Greater Houston has also offered some words of encouragement and advice – don’t back down.

“The parents I’ve seen who’ve gotten the farthest with their kids are the parents whose voices are the absolute loudest. They have to fight back,” Klein said.

Lakay’s school refuses to comment on the subject, other than to say that the recording is incomplete, and therefore, inaccurate. They have also cited a confidentiality notice to explain their silence in the matter.

It’s very sad when special needs children have to suffer because an agreement about their care can’t be made. And in most cases, that disagreement takes place between the parents and the school – considering that the time is nearly divided equally during the school year, each have an equal amount of weight when it comes to the potential recovery or regression of a special needs child. Hopefully, the matter is quickly resolved in a way that is best for Lakay.