Home » Mother Saves Her Children but Loses Her Legs in Tornado 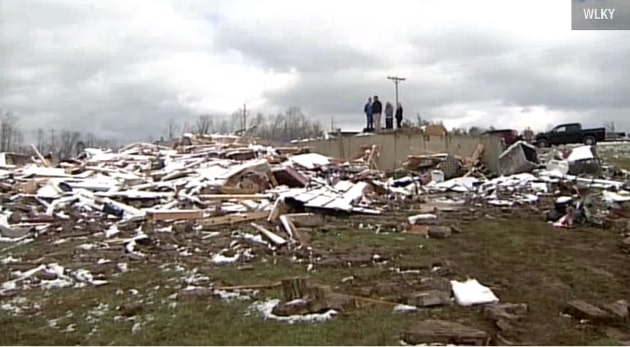 In Henryville, Indiana, there once stood a home with two little handprints in the foundation. It was the Decker’s dream home. They planned to live there forever. Today, that dream home is gone, but the handprints still stand. It is a symbolic resemblance of a family that survived and the mother that risked her life.

“I assumed I was safe, and I heard the roar like a train, and I heard it behind me and I knew it was coming,” Stephanie said. “It was so loud that I knew that I needed to do something different. I knew that staying put wouldn’t work.” 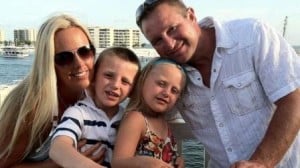 She and her children were right in the middle of one of the 76 confirmed twisters that landed last week. Stephanie had never imagined her house being leveled, but she knew she had to keep her children safe from the storm.

In what may have been sheer instinct, Stephanie rushed down her basement stairs with her two children, Reese, 5 and Dominic, 8. She covered them with a comforter, and then shielded them from the storm with her body.

Stephanie had saved her children. They were completely unharmed, but she was in serious danger.

“I knew my leg was barely attached or it was severed. I didn’t know which, but I knew it was bad,” Stephanie said. “I knew if I didn’t get help soon, I was going to bleed out.”

But somehow, this heroic mother managed to stay conscious through it all.

“I couldn’t afford [to pass out]. They needed me. They had to have me, so I had to figure out what to do,” Stephanie said.

As Stephanie lay there, worried that she wouldn’t make it, a new hero stepped up – Stephanie’s son.

Knowing his mother was hurt, little Dominic crawled out from under his injured mother, through the debris and to a neighbor’s house for help.

“After…Dominic left,” Stephanie said. “I realized I couldn’t get out because I actually used the comforter I tied with them as a tourniquet. I knew I was cut.”

But help was on the way. Before long, Stephanie was being transported to a hospital in Louisville, KY.

Stephanie’s legs would be too damaged to save. One would be amputated just below the knee, the other above the knee. She also had a punctured lung. But none of her injuries would claim her life, thanks to the heroism of her son.

A benefit fund has been started for the Decker family to help with the medical needs of Stephanie. Donations can be made to the Fifth Third Bank, 392 S. Indiana Ave, Sellersburg, IN 47172.