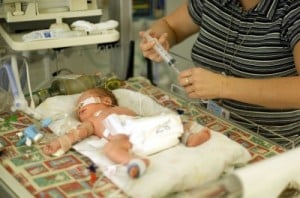 The Apgar score has been used since 1952 by doctors to access the health of a baby as soon as they are born. The quick summary of overall health is considered a vital tool for many doctors. Taking the traditional Apgar score a step further university researcher in Stanford have come up with a new Electronic Apgar that can more accurately assess and predict the future health of premature babies.

Called the ‘PhysiScore’, this new electronic version adds a prediction algorithm into the old system. This way the newborn’s gestational age, birth weight etc. are taken into account along with other real time data that is continuously collected like their heart rate, oxygen saturation level, respiratory rate etc.


According to the student researcher Suchi Saria, PhysiScore outperforms the Apgar and also other assessment systems that use more invasive laboratory measures and piercing needles into the fragile newborn. She also highlights that the system is a cost-cutter.

“The tool can be cheaply implemented on a bedside monitor utilizing existing resources in the NICU. A tool such as ours can help identify more accurately which infants need to be moved to a specialty hospital over being kept at the local nicu so it can save money by giving more accurate information based on which treatment plan/transport decisions can be optimized.”

The new system has been, to date, only tested in research conditions and although the researchers are confident that it will revolutionize the way preemie health assessment is made, it may be a long time before doctors put as much trust on this system as they do on the Apgar score measured between zero to ten and which is an acronym for the five criteria Appearance, Pulse, Grimace, Activity and Respiration of the baby just after birth. – Atula, Staff Writer