We all know as pregnant women, what we eat does affect our baby, and even beyond infancy. But a new study published in the medical journal Cell Metabolism led by researchers from the Novo Nordisk Foundation Center for Basic Metabolic Research has found that what dad eats and how his appetite is can affect baby and their future, too! 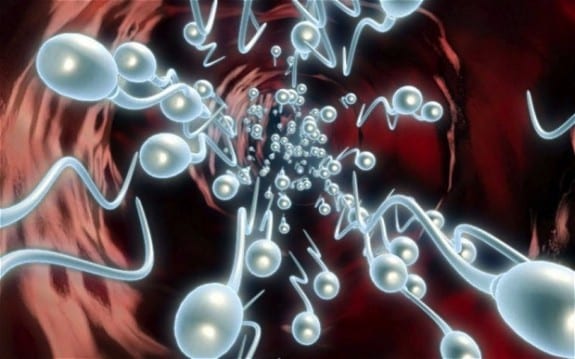 Professor Romain Barrès laboratory looked at sperm cells from 13 lean men and 10 obese men, and found that the sperm cells in lean and obese men, respectively, have a different epigenetic marker that could possibly alter their offspring’s appetite. A second large discovery was made when researchers tracked six men before and one year post gastric-bypass surgery, to see how the surgery affected the epigenetic information in their sperm cells. Researchers found that an average of approximately 4,000 structural changes to sperm cell DNA from the time before surgery, immediately after surgery, and one year later.

Barrès said, “We certainly need to further examine the meaning of these differences; yet this is early evidence that sperm carries information about a man’s weight. And our results imply that weight loss in fathers may influence the eating behaviour of their future children.” Certain epidemiological observations were made that show that “acute nutritional stress,” such as famine in one generation can increase the risk of diabetes in the next.

Barrès cited another study that showed the amount of food in a small Swedish village during a famine, and it correlated with the risk of their grandchildren developing cardiometabolic diseases. The grandchildren’s health would likely be influenced by their ancestor’s sperm or egg, which would have carried the specific epigenetic marks, for example, chemical additions to the protein that encloses the DNA and methyl groups that change the structure of DNA, once attached, also known as small RNAs. These epigenetic marks can control the expression of genes.

Barrès said, “In our study, we have identified the molecular carrier in human gametes that may be responsible for this effect.” By finding the differences in small RNA expressions and DNA methylation patterns, researchers have found that weight loss can change the epigenetic information men have in their sperm. This essentially means that what’s in dad’s sperm can possibly affect the development of an embryo and shape their children’s physiology.

“We did not expect to see such important changes in epigenetic information due to environmental pressure,” said Barrès. “Discovering that lifestyle and environmental factors, such as a person’s nutritional state, can shape the information in our gametes and thereby modify the eating behaviour of the next generation is, to my mind, an important find,” he added.

Obesity is important to factor in as well as it has become a worldwide metabolic disorder.

Ida Donkin, MD said, “Today, we know that children born to obese fathers are predisposed to developing obesity later in life, regardless of their mother’s weight. It’s another critical piece of information that informs us about the very real need to look at the pre-conception health of fathers, and it’s a message we need to disseminate in society.”

Co-first author of the paper, Soetkin Versteyhe says, “The study raises awareness about the importance of lifestyle factors, particularly our diet, prior to conception. The way we eat and our level of physical activity before we conceive may be important to our future children’s health and development.”

While still in the early stages, our gametes which was once thought as something we can do nothing about, may in fact be modifiable. New studies and investigations will surely follow into this breakthrough.