As new parents, we always think of our babies as fragile, and that they’re going to break if we touch them. But, for two British parents, this was their reality. When little Ruby McCullough was born, her parents weren’t even able to touch her. Within the first few weeks of her life, she had three heart attacks. Doctors gave her a 20 percent chance of survival.

Mom, Jo-Ann McCullough and her fiance John Callaghan were understandably upset and scared as they waited for a donor heart for their newborn daughter. Jo-Ann told the Gazette Live, “When Ruby was born, she was born blue. She had the cord around her throat, so at first it was put down to that. But then after about 12 hours, she started breathing really heavily. She was taken away and we didn’t see her for hours while they were doing tests.”

After waiting five hours, test results revealed that Ruby had a condition called dilated cardiomyopathy, meaning that her tiny heart’s left ventricle was enlarged, as well as weakened, thus reducing her body’s ability to pump blood around it. According to the cardiologist, Ruby was only given a 50 percent chance of living and that there was no surgery nor cure that could be offered. Jo-Ann said, “A transplant wasn’t an option to begin with.” 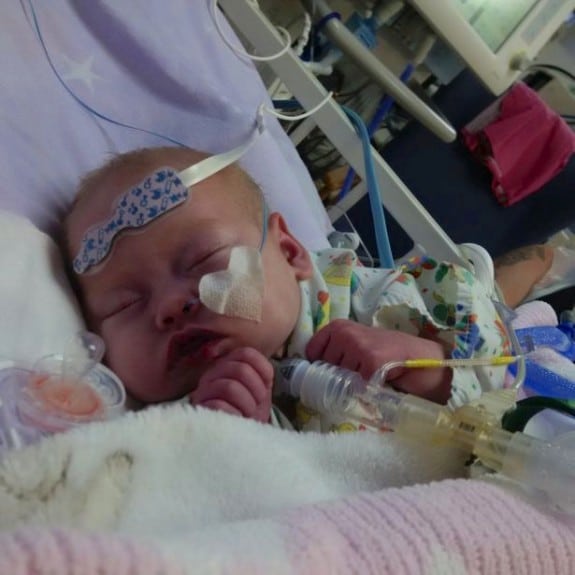 Jo-Ann explains, “We were told they have to give her a month before they could put her on the list. Basically from there, Ruby started getting worse and, when she was three weeks old, she went into heart failure.” Doctors at the Royal Belfast Hospital for Sick Children, doctors decided to medically paralyse and sedate Ruby, because she was so fragile. Jo-Ann says, “She had an 80 percent chance of dying, even touching her would get her too excited. When they asked if we wanted to let her go or go down the transplant route, there was no doubt in my mind.”

However, there were already three other babies on the transplant list, and it didn’t look good for Ruby. She was given a tracheotomy to help her breathe and a feeding tube for nutrition. 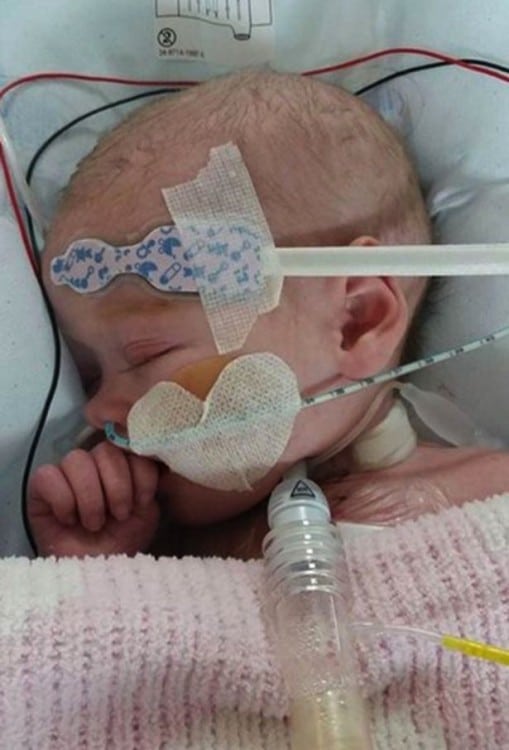 “For a little while she was able to have her eyes open,” said Jo-Ann. “She was listening to us and following us with her eyes which was really cute – but then she went downhill again. She wasn’t allowed to be touched, not even by the nurses, except to change her.”

As her condition worsened, Ruby suffered her first heart attack on September 1, as well as a second and third eight days later. After that, the question that no parent wants to answer was asked; does the medical staff resuscitate Ruby if she goes into cardiac arrest again? Jo-Ann and John were faced with one of the hardest decisions of their life. “She’d had three cardiac arrests in eight days and they told us she was probably going to have more. We spoke with the doctors and decided that if she had another we would let her go. It didn’t feel right to keep resuscitating her,” said Jo-Ann.

Approximately a week after she was put down as “do not resuscitate,” she was offered a bed at Freeman Hospital, where she was then fitted with a Berlin Heart, which is two tubes put inside her to help pump the blood through her body. From there, news only got better for the family, and little Ruby – as a donor had been found. The transplant operation took place on October 27.

Jo-Ann recalls, “The day they told us they had a heart for Ruby, I was just smiling so much. I didn’t believe them at first but they told me there was still possibility that it wouldn’t match. We found out that the heart could be hers at 10AM but we didn’t find out it was hers and a good match until 4PM.”

Adding,  “She went in for surgery about 5PM and was there for six-and-a-half hours. As soon as she came round after the operation, she wriggled her arms and legs and she looked like a new kid. She’d never smiled before in her life but just a couple of days after that, she started smiling. It was like she knew she had a chance at a proper life. Now I can go and pick her up and I can wash her without having to wait for nurses. I can be a mum.”