No one could have predicted that on May 8th when Evan James Dougherty made his early entrance into the world that he was going to tip the scales at 14lbs. 5oz. 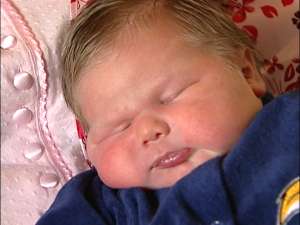 Born at Mercy Hospital in Buffalo, the infant had the hospital a buzz with his 23.5-inch length and incredible weight.
Parents Tammy and Bob Dougherty were surprised as well. “When they said how much he weighed I started balling my eyes out in the operating room…it was just so surprising,” Tammy said.

Bruno says, “Good thing I had eaten my Wheaties in the morning to hand the baby off to the nursing staff because I didn’t anticipate he was gonna be so large.”

Dr. Bruno predicted the baby would weigh around 11 pounds. He adds if the baby had been born on the due date, about 10 days later, he could have weighed over 15 pounds.

Tammy Dougherty is just relieved the pregnancy is now over as  she has been barely able to walk or even breathe for the last month.

Baby Evan is already wearing clothes for a 3 to 6-month-old baby. The nurses in the maternity ward had to seek out bigger diapers as well.

The story doesn’t mention whether or not the mom was diabetic. It is common for pregnant diabetic moms to have large babies like this. His cheeks are so cute!