Home » Pregnant Bridesmaid Has To Leave Her Sister at The Altar 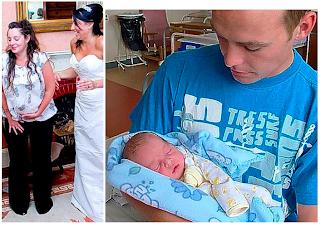 Babies will arrive whenever they want – even if your sister is getting married!

On her sister Nikki’s wedding day, Gina Weeks was determined that nothing would stop her being a bridesmaid.

But her unborn son had different ideas.

Hours before the ceremony, 22-year-old Gina went into labour. By the time pre-service pictures were being taken, she was having contractions every two minutes and clinging to the bride for support.

Finally, with only five minutes to go before the ceremony at a country house hotel, Nikki scooped up her train in her arms and helped her panting sister down the stairs from the bridal suite, carefully avoiding being seen by her fiance Tim Hewston.

Gina’s partner Russell Cox drove her to the maternity hospital 20 minutes away and their son, Harley, was born four hours later – in time for his arrival to be announced by the DJ at the wedding reception.