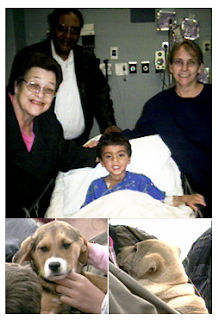 A toddler lost in the Virginia woods was back home safe Sunday thanks to two puppies who kept him warm through a harrowing night of freezing temperatures.

Jaylynn Thorpe, 3, wandered away from his baby-sitter at 4 p.m. Friday and was missing for 21 hours as close to 300 people from North Carolina and Virginia joined in the search to find for him in the thick woods of Halifax County, fearing the worst.

Officials said the lost little boy and the two family puppies wandered up to a mile in the dark, even across a highway, but it wasn’t until Saturday afternoon that members of the search team found him sitting by a tree, the two puppies nestled against him.

When they found him, the little boy didn’t say anything, but instead “just opened his arms up like, ‘I’m ready to go.'”

Billie Jo Roach, a member of the search party that found the boy, said the puppies refused to leave his side.

As the child was placed in an ambulance to be taken to a local hospital for examination, “The puppies were watching where he went.

“Where he went, they went,” she said.

As word went out that the child was alive and well, family members cheered and cried for joy.