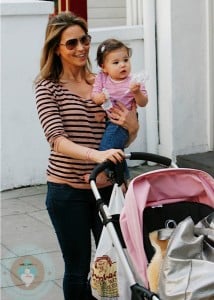 Former Sclub 7 member Rachel Stevens is just starting to get back into the studio, but since last year, her focus has been on raising her baby girl, Ameile. And like most new moms, Rachel had to adjust to a transformed life. She shares her experiences and what helped her adjust to her new life with Female First.

“I’m kind of just learning. You don’t know what you’re doing. Your whole life changes dramatically; sleepless nights and all those sorts of things, so it’s a massive life change,” Rachel said.

But the new mommy crazies didn’t last for long Rachel. After the initial three months, she says she finally felt like she knew what she was doing. But all of that wasn’t accomplished without a little (okay, a lot) of support.

“I had loads of support around me and three of my girlfriends also have babies of similar age, so they were having their babies and we could compare notes,” Rachel stated. “I think that was really lovely for me to be able to ask advice from them…they were a little bit a step ahead of me so you could as them, ‘Oh, so what kind of cup did you use for this.’”

And as much fun as she says it’s been being a mom to Ameile, she says that it’s time to start back to work now that her daughter has reached that one year mark. This, of course means new challenges for the UK singer.

“She’s into everything,” Rachel explained when she told Female First that she can only bring Ameile along to functions sometimes. “We literally would be chasing her around. She’s literally about to walk so I wouldn’t get much done. You would be chasing me around with the Dictaphone.”

Best of luck to Rachel while moving into the working mommy phase. Her challenges sound a lot like mine. Trying to write with two toddlers running around can be…interesting.