No, they’re not the latest reality television family. And as far as we know, they’re not really looking to get famous; they’re just happy welcoming their 100th grandchild into the family—a very BIG family. 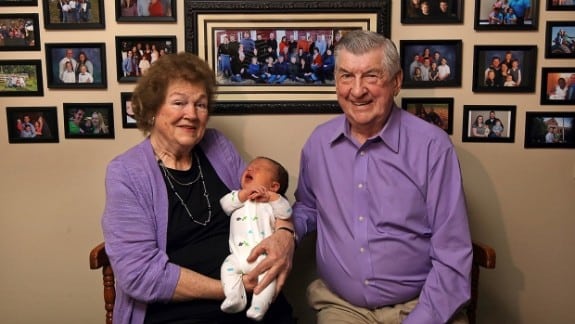 “The good Lord has just kept sending them,” Leo Zanger said of his grandchildren. This currently includes 53 grandkids, 46 great-grandchildren and one great-great grandchild. “We could start our own town.”

It all started 59 years ago, back when Leo and Ruth got married. They had 12 children of their own children, starting with Linda in 1956. The last was Joe, now 31, who was an uncle 10 times over when he was born back in 1984. The siblings that fell in between included Greg, Debbie, David, Donna, Steve, Mike, Daniel, Ernie, Matt, and Chuck.

From there, the family has just grown and grown. Many of them have, currently do, or at some point will work for the family real estate business, Zanger and Associates. And when they’re not working, they’re finding an excuse to get together.

Christmas, Thanksgiving, Easter, Mother’s Day, and Father’s Day are the mandatory family get-togethers, which, as you can guess, are quite a big to-do, with about 50 pounds of ham or 10 turkeys.

“We rent out a church hall,” Austin Zanger, one of Leo and Ruth’s grandchildren, told Whig.com.

Yet, somehow, they keep things organized.

“Everyone takes their turn [helping with food], and they all try to outdo each other,” Donna, one of Ruth and Leo’s daughters, told Whig.com. “We are always getting together for something.”

Donna, who happened to be born “during the snowstorm from hell” in 1962, also happens to be the unofficial family historian. She keeps meticulous records on the family, including names, numbers, dates of birth, anniversaries, weddings, and pretty much anything else that happens to be directly or indirectly related to the Zanger family. And that’s not her only “job.”

“[Other family members] always say, ‘Since you already have all the phone numbers, can you just text [or call] them and let them know about whatever the event is?’” she said.

And it seems that she’s doing so quite often.

“We’re all really close. We get together a lot,” Austin Zanger, proud father of the 100th grandchild, told Whig.com. “There’s always a lot of interaction. We spend a lot of time with each other. I know there are a lot of families half our size who only get together maybe once or twice a year.”

“We enjoy all of the family get-togethers,” Leo said.

But they seem to especially enjoy those that include welcoming in new family members, such as the newest Zanger who, at first, no one realized would be the 100th.

“We didn’t even now until Donna and Kelly figured it out and told us about three months along,” Austin said. “It’s pretty special – 100 grandkids, that’s a big deal.”

Congratulations to the Zanger family, and may they continue to grow and stay as wonderfully close as they all are now.