Gordon Allan Lake and his husband, Manuel Valero, already had a son, Alvaro, through surrogacy in India two years ago. When they decided it was time to expand their family, the couple turned to Thailand. The regulations in India had changed, and they felt there were a lot of benefits to choosing Thailand. 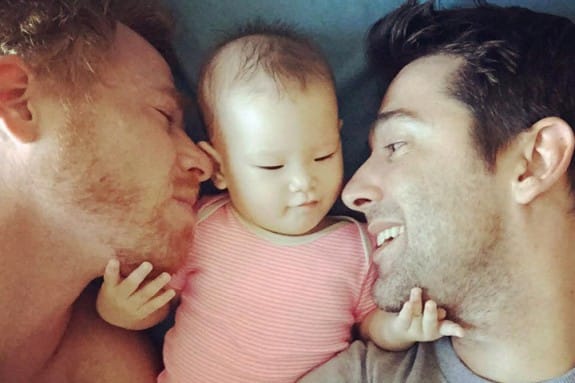 “Thailand has great medical facilities, hospitals, embryologists, and surrogacy has been going on for years in Thailand,” Gordon told NY Post. “Everyone had great expectations. There was no reason to think anything could go wrong.”

The surrogate, who is in no way biologically tied to the baby, decided she wanted to keep Carmen – the couple’s baby girl – while they were preparing to return to the States. Gordon said she “had issues” with the couple’s sexual orientation and had never turned up at the U.S. embassy in Bangkok in January to sign off on Carmen’s passport application, which they needed in order leave the country.

Unfortunately, the surrogate is well within her legal rights.

Soon, foreigners will no longer be able to seek surrogacy in Thailand because the laws are getting ready to change (after other problems such as this, and the Australian couple that reportedly only took a healthy twin girl and left the twin boy with Down Syndrome behind). But up until the change that is set to go into effect July 30th, the surrogacy laws have been rather loose . . . with one major exception.

The birth mother is always recognized as the mother and legal guardian of the child. Commissioning parents have no automatic legal rights, even if they are the only ones biologically connected to the child. And U.S. couples (or any other foreigners, for that matter) are subject to the laws. They must receive consent from the child’s legal guardian before a passport can be issued.

So far, the couple’s battle for Carmen has lasted six months, and there doesn’t seem to be an end to the issue in sight. They have their baby girl, but they cannot leave the country with her and return home.

“We have been here six months and our lives are being destroyed,” Gordon said. “Our families have missed out on the first six months of Carmen’s beautiful life.”